The History of Reindeer during Christmas

You know Dasher and Dancer and Prancer and Vixen, Comet and Cupid and Donner and Blitzen.  But do you recall the most important reindeer of all?  Sorry, we're not going to talk about Rudolf, this is, after all, a History series.

To really appreciate the significance of Reindeer during the holiday season, we are going to leave the Germanic traditions and travel to the indigenous tribes of the far north, not just in Europe, but in Asia as well.  Siberia, Mongolia, the British Isles, all these have traditions and stories about a goddess associated with the sun and reindeer.  The Deer Mother goddess in her different forms was highly venerated.  But today I want to focus on the Sami people, because I think that the familiar is often the best springboard for study.

Even if you don't recognize their name, there's a good chance you've seen them represented on the big screen. Thanks to the phenomenal success of Disney's Frozen 2, young children all over the world are falling in love with the simple, holistic way of life of the Sami.  Known in the movie as the Northuldra people, Disney drew its inspiration from the Sami tribes, and worked hard with the Sami to fairly represent their people.  There was even a translation of the movie into one of the Sami languages in tribute. 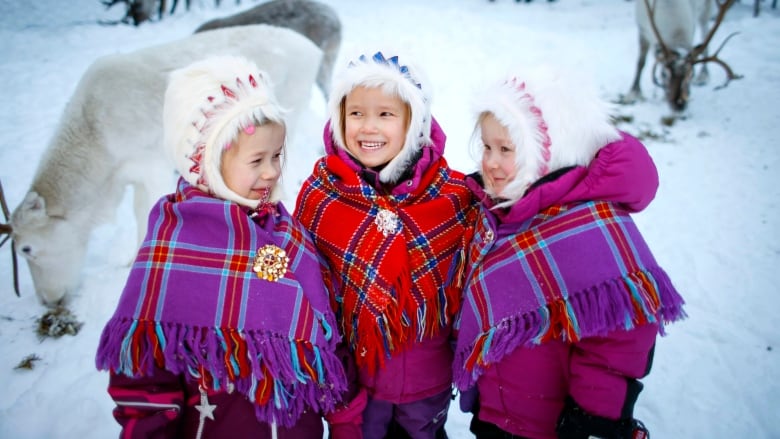 Who are the Sami People?

When Frozen 2 first came out there was a period where people expressed outrage that the indigenous people in the movie, with their teepees and nomadic lifestyle, were white.  Fortunately it didn't take long for these nay-sayers to quiet down as education spread.  Indigenous means native to a region, and white people have places of origin just like everyone else.  And the structures seen in the movie weren't teepees at all.  Sami independently invented similar structures, called goahti.  They might be permanent, using wooden timbers and insulated with pitch or sod.  Or they might be made for temporary use, using reindeer hide.  Goahti are wider than teepees, and the vertical poles do not interlock.  Instead there are internal horizontal bars or arches to support it.  The structures seen in Frozen are Goahti.  However, Sami also had even more temporary structures called lavvu, and they only had vertical bars. 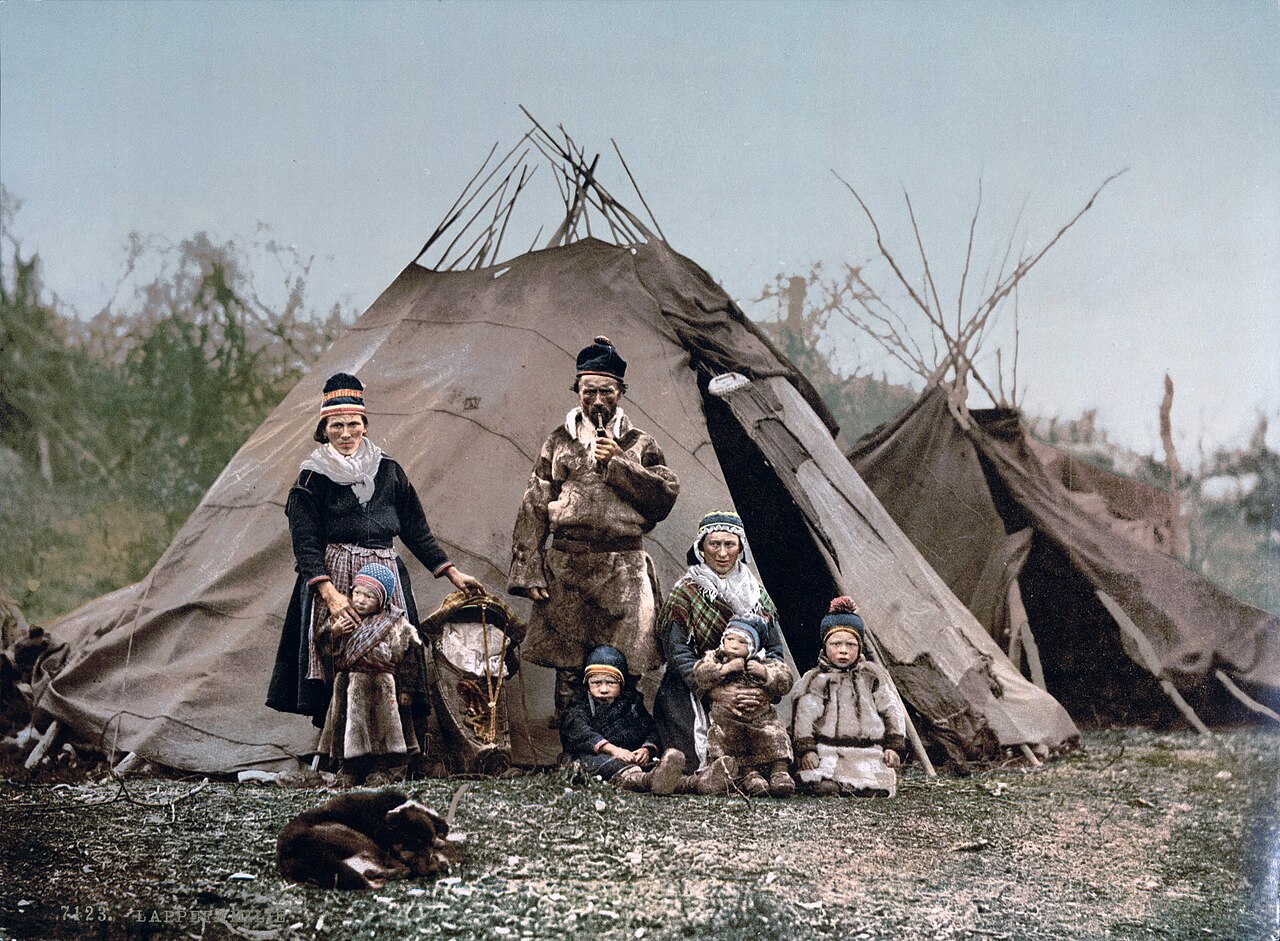 This picture of a Sami family was taken in 1896 in northern Norway.  There is a Goahti in the foreground and a lavuu behind it.

The lodging of the Sami people is relevant because it is the kind of housing that belongs to nomadic people, which was, and still remains a very important part of their culture and way of life.  For to be the caretakers of reindeer is to migrate with the reindeer as they seek new places to eat.  Reindeer are for the Sami people what buffalo were to the native plains tribes like Sioux, Pawnee, and Crow.  Reindeer provided milk, hides, and food.  Surviving the long, cold winters in the far north was only possible because of the reindeer.

Unfortunately the Sami have had tremendous religious persecution during the Christianization of Europe.  Their shamans were persecuted for witchcraft and sorcery, and many were executed in the 1700s.  Sami Shamanism included a beautiful kind of chanting called joik, which was also widespread through the tribes in a folk-music setting.  Most songs were about reindeer or simply about their daily lives.  But because the joik was an important part of the religion, it was forbidden by the church and those caught singing could be punished.  There were fears that the songs were magic spells or rituals, and that superstition made it very hard for for the Sami.  But it was such an integral part of their daily lives, so ingrained in their culture, that it survived.  Living in harsh climates isolated them enough that they were often able to sing in peace. I greatly admire their courage and am so grateful that it did.  Now the joik has gained an unprecedented popularity because Disney has featured it in their Frozen films.

The Norwegian composer Frode Fjellheim has studied joik extensively and is the composer of "Eatnemen Vuelie" ("Song of the Earth"), which included both joik elements and the Christian hymn "Fairest Lord Jesus".  Disney researchers for the film came across a the choir Cantus singing it and loved it so much it was adapted for both films.  And the best part is, they hired Cantus for the recording.  It is a women's choir, all the singers are Sami, and they always wear traditional clothing when they perform to spread appreciation for their culture.

Sami Reindeer and the Winter Connection

No one lives farther north than the Sami (although other cultures do match them.)  The weather can be bitter cold and harsh, especially in the middle of winter, where the sun can disappear for months at a time.  The sun goddess Beaivi grows weak, and it is Deer Mother who carries her and supports her in the winter.  Butter was a symbol of the sun, and Sami would rub it on their doors as a libation to give her strength to fly higher and higher in the sky.  The male reindeer all loose their antlers in the winter, and the females keep theirs.  The divine feminine shines through, and many of the Shamans in the surviving faith are also female.

“The Legend of the Hind”, Traditional Hungarian folk song 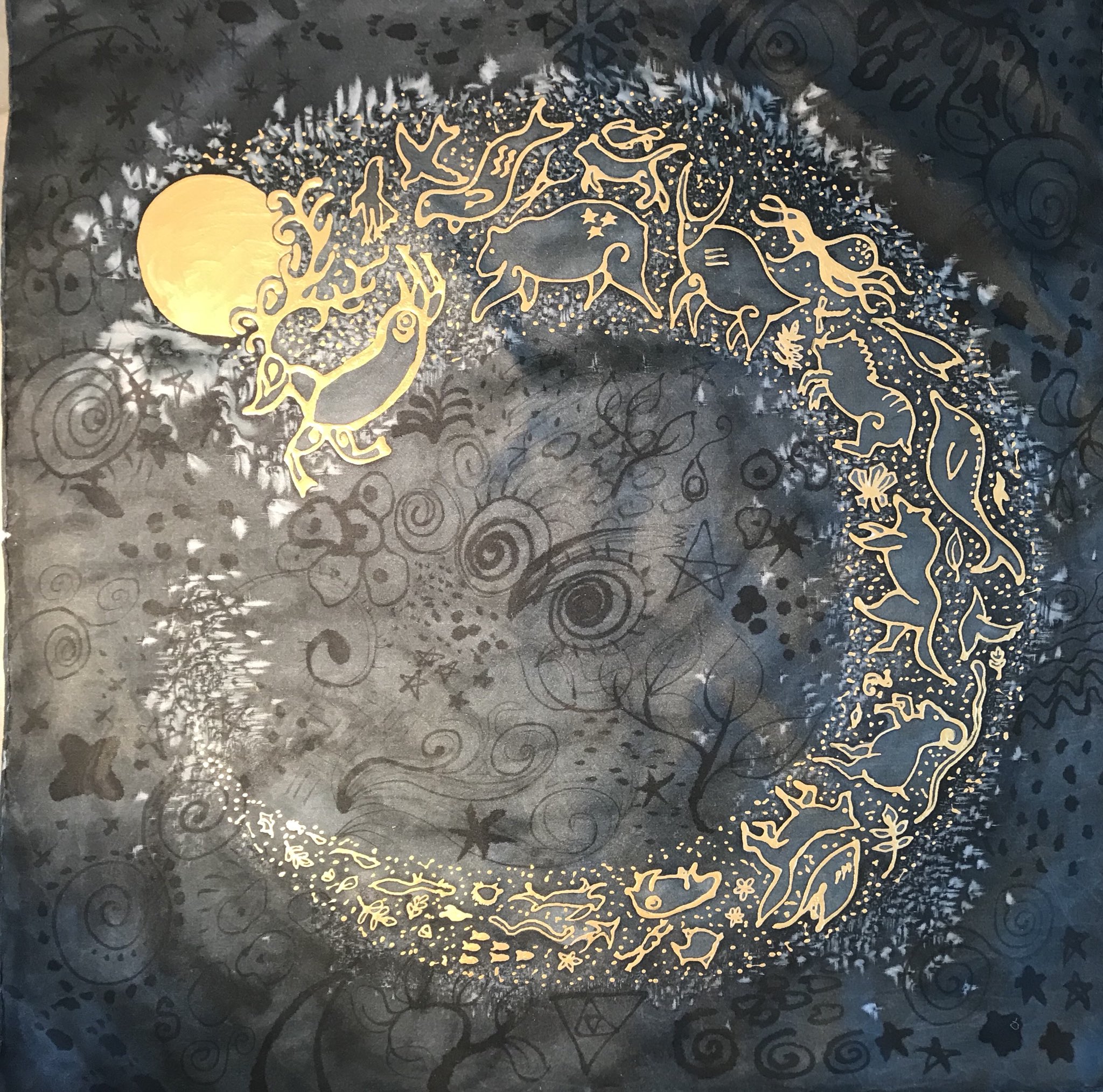 Gather Victoria has a fascinating article for more information and sources about the Deer Mother's journey at night to bring the sun back.  I highly recommend her post, even if just to look at the pictures.  See also "The Reindeer Goddess".

In time, the deer goddess branched into another deity known as the white stag, which has a mythos all its own.  It is associated with the horned god, and during Christianization, it became an angelic visitor, and sometimes it was a manifestation of Christ himself.  Today, perhaps the best known archetype of the white stag in popular fiction is the patronus of Harry Potter and his father. 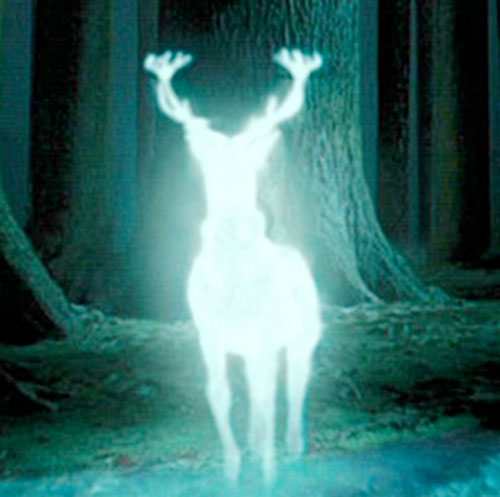 While there are flying hordes in the Wild Hunt led by Odin that certainly have deep connections to Christmas, the lesser-known flight of the Deer Mother who brings back the sun and all of the life and fertility that comes with it is my favorite.  Reindeer have been flying during midwinter for thousands of years.  How appropriate that Santa would have chosen them to pull his sleigh.