The History of The Twelve Days of Christmas

"On the first day of Christmas, my true love gave to me... a misunderstood history..."

A few years ago I wanted to learn more about the history of the 12 days, and my search results brought up very little, and what I could find didn't feel very authentic.  This year there is a lot more available on the subject, or perhaps just better search engines, and I'm very happy about that.

Today I want to address why there were twelve days of Christmas, the difference between the 12 Days of Christmas and Advent, and where the song comes from, and the mystical symbolism behind it.  Or something. 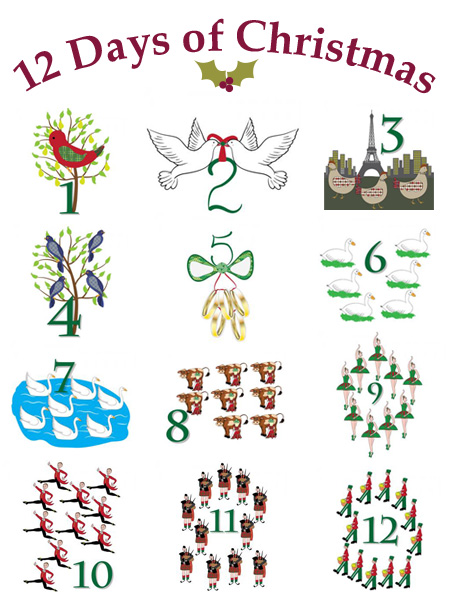 Where did 12 days of Christmas come from?

In the early days of Christianity, the most important feast day was Easter.  And after that was the Epiphany, which means revelation.  The day when it became known to the world that Jesus was the Savior of the World.  In Eastern traditions, that revelation happened when Christ was baptized and the Father declared he was his son, and the Holy Ghost descended as a dove.   In Western traditions, it was when the Magi presented their gifts to the Christchild.  But either way, Epiphany was an important celebration held on January 6th, that still trumps Christmas in some countries.  In others, Christmas (Christ's birth) and Epiphany were held on the same day.  Sometimes it is known instead as Three Kings Day.

The celebration of Christ's birth came as an afterthought.  When it was established, they decided to hold it on the winter solstice, then December 25th.  Now there were two holidays, and a growing confusion about how to celebrate them as the church grew and conflicting traditions began to clash.  And to make it even more confusing, the lunar-based calendar's in the east and the Julian calendar in the west were not the same.

The 6th-century solution to the chaos was to create a Christmas holiday that began at Christ's birth on December 25th, and ended on January 5th (12th Night, for you Shakespearean fans out there!).  It all led up to Epiphany, which stood on it's own.  Unless of course, you lived in a region that started with Christmas on it's own followed by 12 days of Christmas beginning December 26th and ending with Epiphany.  It seems than unifying the whole Christian world under one holiday celebration was going to be harder than they thought!

Wikipedia is a good place to try to make sense of it all, but the takeaway here is that it BEGINS with Christmas, and does not start 12 days before December 25th.

I will be doing a future segment on Yule, but for now I want to point out that pre-Christian Yule was only 3 days long.  King Haakon I of Norway, who ruled from 934-961 AD declared by royal decree that Yule and Christmas would be held at the same time.  This was the origins of the 12 days of Yule, and it happened more than a millennium ago.  With centuries of 12 days of Yule behind us, it is absolutely appropriate for Pagans to celebrate for 12 days of Yule if they want to, even if some traditionalists are vocal about letting it go.  However, it is not correct to say that Yule had 12 days first, as I have seen in some threads and blogs, nor is it right to say that Christians stole 12 days from Paganism.  Some Christmas customs really did start with Christianity, and given how ancient the holiday is, this shouldn't surprise anyone.
The 12 days of Christmas each had it's own special mini-holiday which, in some cases, got far more attention because they fell in between Christmas and Epiphany than they would have gotten on their own.  Why Christmas has a list of what was traditionally celebrated each day, but if you want to celebrate other ways, there isn't anything wrong with forming your own traditions.  And for anyone new to Paganism and wanting to find a way to celebrate the 12 days of Yule, I think Nordic Wiccan has some nice suggestions.

How does Advent play into this?

Advent comes BEFORE Christmas, and the 12 days of Christmas begin on Christmas day.  The confusion about where the 12 days fall is what has led to some people equating the two, but they are different.

Originally, Advent has religious Christian origins as a special lead in to Christmas.  It began 4 Sundays before Christmas, inclusive where applicable.  So often advent would begin at the end of November, and was primarily observed on Sundays as a part of mass and/or home worship.

Some time in the early 1800s in Germany, The Advent began to be commercialized in to Advent Calendars.  Originally they were small verses, but in time they expanded to include trinkets and sweets.  Businesses recognized this as a convenient way to get samples of their products into homes.  This Advent Calendar History has lots of vintage pictures and information.  There have been many variations of Advent Calendars out there, including this blog post series.  Yeah, I stole the idea too, haha.  We have gotten a Lego Advent Calendar for our kids every year for awhile now, and it's something they really look forward too.  This year we're enjoying the Star Wars Special.

A word on the repetitive song.

And finally, I promised to give some insight into the mystical meaning behind the lyrics of "The Twelve Days of Christmas".  There have been many popular theories posited about how it has spiritual meanings, connecting each of the 12 days to some aspect of Christianity.  In some it is to help children learn about church doctrine, in others it might have been an underground way of keeping Christianity alive during persecution.  The latter is highly unlikely since Christianity was a church state in Europe, the conflicts between different denominations notwithstanding.

But no, the lyrics were simply a memory game.  A party game in which, in some scenarios, forgetting what came where might mean you have to forfeit a kiss or other favors. One of the main reasons we know this is that there are many other verses with similar poetry, such as The Yule Days.  That's it.  That's why there were so many ridiculous gifts, in this case mostly with connections to birds.  They were never supposed to make sense.  They were never meant to be practical.  It was just whimsical fun that continues to be an excellent memory-building exercise to this day. In that spirit, I'm sure the original lyricist and later composer would be proud of all the parodies that have come since.  (5 Roast Beef Sandwiches, anyone?)  You can learn more about the history behind of the song The Twelve Days Of Christmas from Vox.

I'll close by sharing my absolute favorite arrangement of the 12 days of Christmas, which is a historic journey in and of itself.  It's so delightful!