The History of St. Lucia Day

It's here!  St. Lucia Day is my favorite holiday tradition I have introduced to my children since becoming more aware of the the larger world of Christmas.  In Nordic countries like Sweden, Denmark and Norway, St. Lucia is the first official day of the Christmas holidays.

The first time I saw a crown of candles was actually on the goddess Brigid while studying Imbolc, a Pagan holiday that falls on February 2nd, a parallel holiday to Candlemas and Groundhog day.  Brigid is a goddess who ushers in the spring, bringing life, light and growth.  When I stumbled across St. Lucia Day shortly after, I knew I was going to make it a special day for my family.

Everything from the traditional attire, the candles, the Christmas music processions, the delicious food, and it's strong ties to the Nordic countries of my ancestors have endeared me to this holiday. 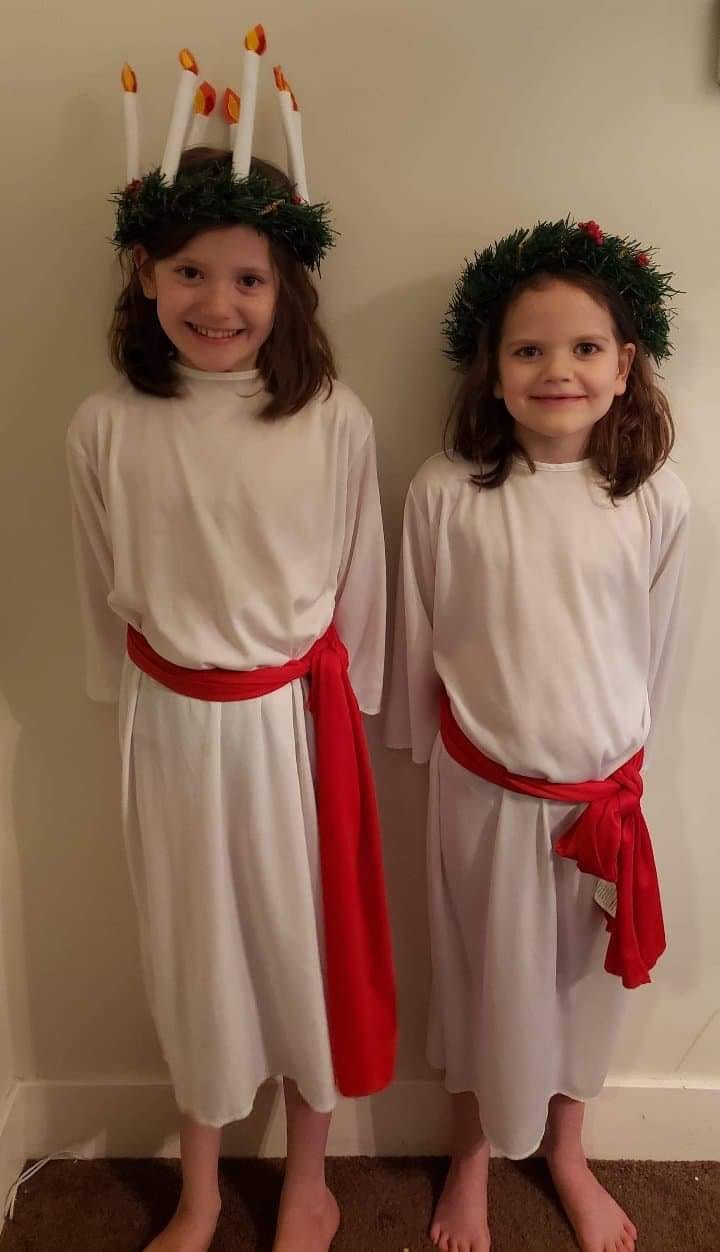 Who was St. Lucy?  She was a 3rd-century Catholic Saint from Italy.  According to legend, when her father wanted to force her into an unwanted marriage, she ran away and dedicated her life to God, and service to others.  There were Christians who were forced to live in hiding in the catacombs, and Lucy had the means and will to help them with their basic needs.  With so much work to do, she needed both hands free and devised a crown of candles, making her much more efficient.  Her Feast Day was established as being December 13th, the day she was believed to have died, before the Christianization of Northern Europe.  Tradition has it that when missionaries told the people in the north about a saint who brought light to her people, it resonated with the Nordic people.  Since December 13th was the winter solstice according to the Julian calendar, they adapted it and made it about the winter solstice and the hope for light with the returning sun.  However, it is mostly unknown how her feast day was celebrated in ancient times, only that it was recognized.  Modern St. Lucia Day celebrations with the saffron buns, gingerbread cookies, and processions is estimated to be about 200 years old.  I think studying the elements of the holiday itself is the best way to understand and appreciate St. Lucia Day's history. 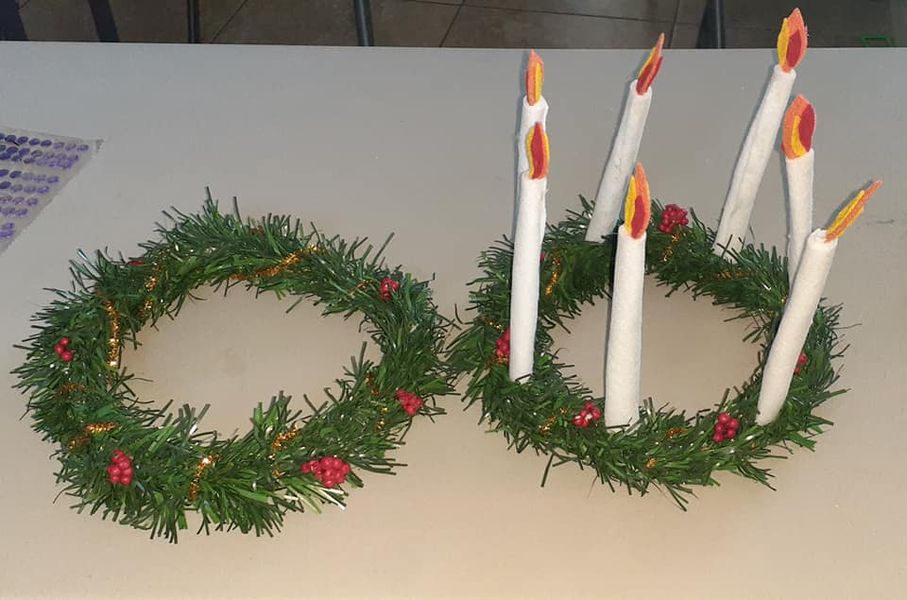 For someone not very crafty, I'm feeling rather proud of myself for making these adorable and cheap St. Lucia Day crowns for my daughters. (It little over $4 for both) My youngest didn't want candles and it's traditional for only the oldest daughter to have them anyway.

Tools needed, scissors and a hot glue gun.  I made the felt candles according a tutorial on Make Life Lovely.  I'm partial to my more natural-looking crown though, and it was easier to boot!

For the rest of their attire, I purchased white "angel" gowns and red sashes from Oriental Trading Company, which was far cheaper than anything I found anywhere else.  For my "Star Boys", I purchased simple wizard hats, but this was straying from the traditional white hats with gold or silver stars.  Someday I may do something more authentic.  The Star Boys represent the Magi, who were essentially wizards, at least astrologers, so it's within the spirit of the season anyway, I hope.  I also bought battery-operated candles for safety.  A few years ago I tried to make a crown that held the candles, but they were uncomfortable and heavy.  The crowns I made this year worked much better, and both girls have worn them for fun, so I'm very happy with them.

It is also common for children to dress as Santa Claus and Gingerbread Children.

Early in the morning, before the sun rises (which may actually be rather late in the day in some northern cities), the oldest daughter in the household wakes up and prepares breakfast for the rest of the family.  Traditionally this would always include a very special saffron bun known as "Lussekatter", shaped into spirals symbolic of the sun (although other sources have said the buns are supposed to resemble sleeping cats).  This is one time I go with white flour in order to let the flavor of the delicate saffron shine, as well as not hide it's beautiful yellow color.

After breakfast, there may be a procession where the daughter leads the rest of the children through the village, perhaps to do a good deed like feeding the poor or visiting an elderly family member.  The children would sing holiday songs, most notably "Santa Lucia".  The melody was actually written about a Caribbean Island by the same name, but it was adapted for the holiday.  A few years ago I struggled to find an appropriate translation, so I made my own. 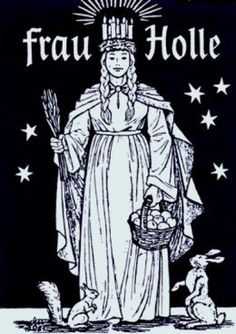 The three goddesses who most resemble St. Lucia, in her gown of white and a crown of candles in her hair, are Perchta, who I have already highlighted in this advent calendar, Brigid from Celtic regions, and Frau Holle.

Although Brigid's feast day is February 2nd, she does have a fun connection to Christmas.  Brigid was a Celtic goddess who was adapted into a Catholic Saint. She was supposedly from the 5th century, she was also a barmaid at the inn when Joseph and Mary were trying to find lodging.  It was Brigid who led them to the stable, she who served as a midwife to Mary, and who then went on to be a nursemaid for the Christchild.  I'm not sure how that works with time travel and all that, but it didn't seem to matter to the Celtic people.  She was celebrated and her new story honored all the same.

And of course, there was the actual St. Lucia, who may very well have been a real person who died as a martyr and deserves a little recognition too, even if some of the miracles in her story are exaggerated.

If you want some fun things to do this special day, there is a nice compilation of activities, crafts and recipies on The Kennedy Adventures.  I especially liked the printable activity from Catholic Icing

I would be lying if I said that my family goes all out on St. Lucia Day.  Yes, we have the attire, and we sing songs and make lussekatter, but I haven't branched out to do much more than that.  I do love that it is both a Pagan and Christian holiday in one, and I wish that more holidays were as open to recognizing our shared heritage as this holiday seems to be.  There is beauty in both religions.  St. Lucia Day is where I really get to embrace my Nordic heritage, feel the nostalgia of the something I cherished most about Christmas growing up (MUSIC!), and feel right at home in my new faith as a Pagan.  It really is a very special way to formally enter the Christmas holidays.