Those who are familiar with the demonic Perchten (plural) may recall stories of how they come down from the alps to terrorize villagers during the Yuletide season.  Others may recall horrifying stories of how she punishes bad children by slitting open the stomachs and replacing their digestive track with straw, rocks, and sometimes trash.  For centuries, Perchta (also known as Berchta) has been part of the darker side of Christmas.  But this has not always been so. 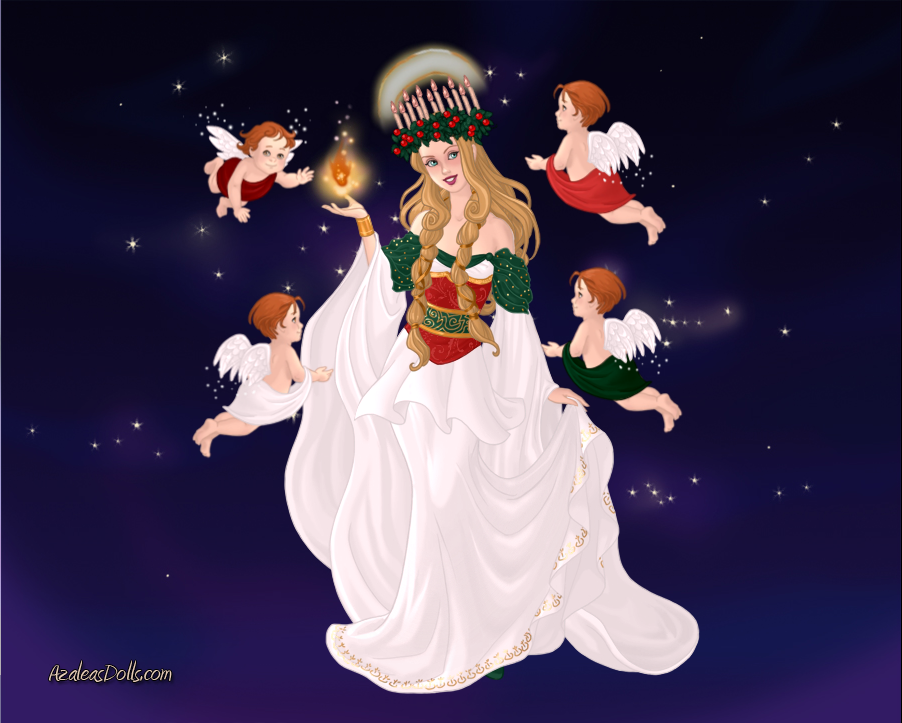 Understanding Perchta's past requires context.  I have deliberately timed featuring this beautiful goddess in my Advent Calendar AFTER The Wild Hunt and Krampus because I think it will help give some of that context.  I also wanted to talk about her before St. Lucia Day because I believe she is one of the main inspirations behind St. Lucia herself.  In truth, I could have included a footnote on Perchta in any of the three, but I think I have enough to say about her history that she deserves her own slot.

Before establishing her defense, I'll play devils advocate and acknowledge that for centuries she has been known as the "Christmas Witch" (Not to be confused with Italy's La Befana).  The short video below gives a nice overview of why you shouldn't mess with her.

Perchta has often been associated with Krampus.  After all, both have demonic appearances.  Both terrorize civilians in parades.  Both punish naughty children, sometimes even taking them to hell.  However, the similarities end there, and I would argue that these similarities came from a blending of cultures, and that they have different roots.  Krampus, I have previously posited, was inspired by the devil himself.  His association with St. Nicholas, his chains, his appearance, all are reflections of medieval depictions of Satan.

Perchta, on the other hand, is better associated with the Wild Hunt, and that ghostly procession had many different angles of interpretation.  Is Perchta leading a band of demons through the night?  Is she leading the ghosts of the dead home?  Or perhaps she is leading a band of good spirits or civilians who were simply in disguise to scare away evil spirits (a common interpretation).  It should be noted that "Perchta" was the individual who led the spirits, "Perchten" were her followers (plural), and "Percht" was a singular follower.  So even when Perchta's parade of scary demonic figures parade through the night, it isn't necessarily characteristic of who SHE is.

One of Perchta's most unusual traits is that one of her feet is shaped like a goose or swan's foot.  A common interpretation is that she is not human, she is an other-worldly power.

It can be symbolic of her ability to shape-shift.  She may simply be changing into animals.  However, like many goddesses, Perchta has a dual nature of being both beautiful and kind, as well as ugly and unkind.  Her evil and scary aspects have been greatly exaggerated in time, and her kind and nurturing aspect has all but been forgotten.

But a goose and a swan?  Well, there's more there than meets the eye.  Some associate Perchta with Frau Holle, who, in Brother Grimm's fairy tales fluffs quilts and makes it snow as the feathers fall out.

Perchta is also similar to Frigg, Odin's wife.  They both were goddesses of spinning, and both were deities that could lead the Wild Hunt.  Frigg led the Valkyries, who would comb the battlefields and take the dead to Valhalla.  They had swan's wings, and were in danger of being trapped in in the mortal realm if they were trapped without their plumage, in their human form.

Swans and geese were both associated with beauty, kindness, loyalty.  Both Perchta's white dress and the white feathers of the birds represent purity.  Perchta's association with the majestic birds also survived in her her bird's beak, often part of her costume.

A hero from the phone app "Empires and Puzzles"

There are many anthropologists who believe that Perchta's nurturing aspect, her association as a guardian of children, and her connection to geese may have ultimately been the inspiration behind Mother Goose.  Certainly there was a cultural folk-connection that people were familiar with.

The Nordic Rune Algiz also probably has a connection to swans and geese, and is representative of both wetlands and the homeland of the goddess Frigga.  There is an interesting Facebook thread about it here, and I have purchased and am currently reading through the referenced book, "The Rune Book" by Woden's Folk Kindred.  I highly recommend it for anyone interested in learning more about the history behind Runes.  Many rune books are either written for academics, and hence hard for average people like me to fully understand, or written from a mystic, spiritual view that all to often forgets to look at primary sources.  This book was written because the authors felt that there needed to be a book that was both academic in its history, accessible to the public, and not dismissive of the magical influence on Rune use in a historical context.  I feel they did a great job!  But I digress.  The point is that large white-winged birds probably tie into Runes too, although I readily admit that any connection between Algiz and Perchta is speculative pondering on my part.

Guardian into the afterlife (Psychopomp)

In some mythologies, she is a lady who leads the spirits of deceased, unbaptized children to hell.  Those familiar with comparative mythology and how the Catholic church often turned gods and goddesses into saints (or demons), will recognize this story as a clue that Perchta's character had been changed to make way for Christianity.  In other stories, Perchta is a gentle, nurturing guardian of children.  While she may punish naughty children, she was better known for rewarding the pure of heart, old and young.  She was one of the early gift-givers of Christmas, and children loved her and anticipated her visits in mid-winter.

She was also known to lead the souls of departed children not to hell, but to a peaceful afterlife where she would watch over them.  I suspect that as Helheim was demonized into Christianity's Hell, so was Perchta's role as guardian of deceased children.  For if she led them to Hell, she couldn't be anything better than a servant of the devil.  Right?

I also find it interesting that in a 6,000 year-old cemetery in Vedbaek Denmark,  A mother who likely died in childbirth was buried with her baby on a swan's wing.  This was a very special, unique find and it is unknown whether or not the practice may have been common or not.  Some have pointed out that the Sami people believed that Swans were the messengers of the gods.  They reasoned that if they could travel on land, on water, and in the air, they must be able to travel between worlds as well.  Perhaps the swan's role as guardian into the afterlife is older than we thought.

Perchta was also a goddess who resided in the in-between.  She was a wild goddess.   She belonged in the alps, the glens, and the forests.  Because of her role taking spirits into the afterlife, she could pass in the mortal realm and the spirit realm.  This gave her the power to protect those in this life from evil spirits.

According to this article on Perchta,  Brothers Grimm gives insight to another story where a young mother, grieving for her young son, sees him marching in a procession with other children under Perchta's care.  Seeing her, he comes to her side and shows her a pail full of her tears.  He asks her not to grieve too much for him, because he is safe and well under the White Lady's watch.

And this is where I will wrap up with my own thoughts that looks can be deceiving.  When I look at the terrifying costumes and see that the first search results for Perchta are ones of horror, embraced by the desire for a good ghost story, I am saddened at what we have lost through history.  I will not deny what she has become, but I will also remember what she once was, and honor her first and foremost as a winter goddess who loved and nurtured children.  A deity who inspired living children to do their best, and guided the dead safely to their final resting place.