The History of Hanukkah

Happy Hanukkah!  In 2020, it begins December 10th.  And while it may not be part of Christmas proper, I think it is still within the spirit of the underlying theme of the Advent- to study the history of winter holiday.  The Jewish festival of lights. 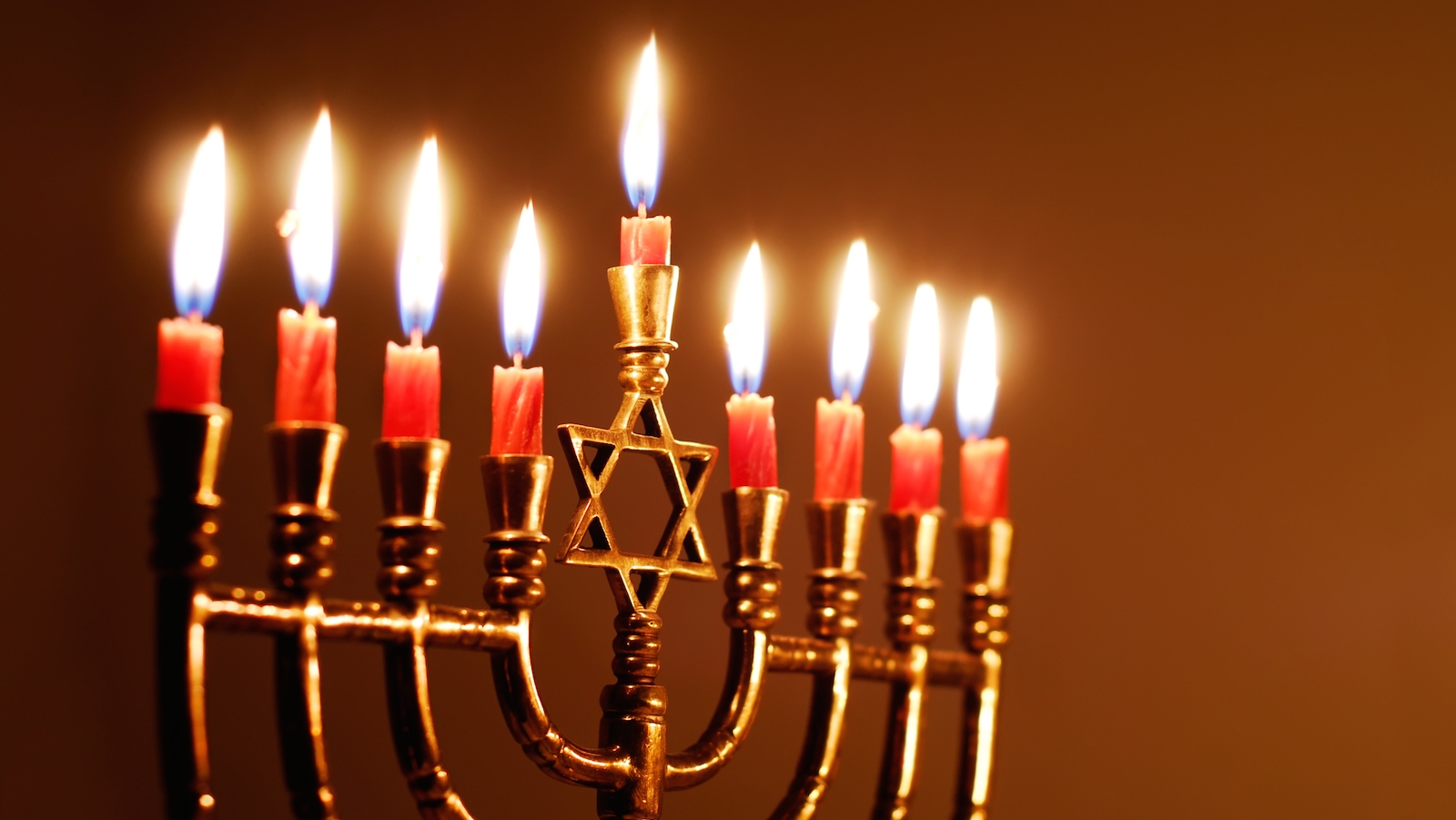 For purposes of this blog post, I am going to assume that there is a basic familiarity with the story of Hanukkah.  That there was religious oppression around 200 B.C. by the Seleucid empire, who practiced Hellenism.  That they were forced to sacrifice pigs in the temple in honor of Zeus.  That the Macabees revolted, and with a small band of the faithful, were able to push back and regain their religious freedom.  That they reclaimed the temple, but it only had enough oil for 1 day, but it miraculously lasted for 8 days, and today Jews light a candle, one for every day of Hanukkah.  It is an easy holiday to observe, and placing the candle in the window is a way to show Jewish pride.  The holiday is also associated with oil-fried food like latkes (potato pancakes) and sufganiyot (jelly-filled donuts).  That is is a time when gambling is allowed, and dreidles are the choice method.  And perhaps that children are given chocolate coins to play with.  Hanukkah is a beautiful holiday of ancient date, a common time for Americans especially to recognize the Jewish faith and greet their friends with a friendly "Happy Hanukkah".

If we go any deeper than that, one finds that Hanukkah is a holiday that is full of irony.  For most Jews, ancient and modern, it is a very minor holiday, the only traditional holiday to not be part of the Mishnah, defined as "an authoritative collection of exegetical material embodying the oral tradition of Jewish law and forming the first part of the Talmud."  It is not part of the Jewish Bible, nor was it preserved by traditional Jewish Rabbis.   Instead, it was Greek-speaking Jews of Alexandria who preserved it long enough for some of them who became Christian to preserve it long enough for it to enter the Christian apocrypha writings.  So, it is ironic that a holiday to celebrate traditionalist Judaism is more well-known than actual traditional Jewish holidays.  It is ironic that a holiday celebrating traditional Judaism over Hellenized Judaism was not that important to traditional Jews, but was instead preserved by Greek-speaking Jews, and later Christians.

And what is most ironic of all is that the Macabees themselves would have hated the way Hanukkah is celebrated today.  Why?  Because Hanukkah doesn't resemble any of the traditional Jewish holidays, and the thing the Macabees were fighting the most was not the Hellenistic religious oppression as much as a new kind of Judaism that embraced some Hellenistic features.  They weren't fighting for the right for Judaism to exist as much as they were fighting to keep the religion pure.  And they were willing to do so by force.  What would they think about how Hanukkah in America today, elevated far beyond it's original intent mostly to counter Christmas?  Many traditional Jews dislike Hanukkah entirely, some feel that Americans have ruined it, and the Jews who have embraced the holiday the most are the ones who have sought to assimilate into "foreign" culture while maintaining and asserting their own identity within it.

Historically, there is considerable doubt on whether the Macabees were truly heroes and not religious zealots.  A study of the Seleucid empire shows that for the most part, they allowed people of all religious faiths to continue worshiping as they wanted too.  The city of Alexandria was a melting pot of faiths.  There were temples there for many different religions, built for emissaries and travelers who were passing through.  Given this precedent for reasonable religious freedom, why would the Jews be targeted?  Why would Judaism be suppressed?

The answer according to some academic sources, civil war.  The conflict leading to the Maccabee revolt began with internal fighting over what Judaism was.  There were some who wanted to keep the religion pure, universally, while there were others who were fine allowing Greek culture and religion to permeate into their way of life.  Who would get to chose who the high priest would be?  The religious conflict between these two groups of Jews grew to the point that it got the attention of the Antiochus IV, who was enraged that the high priest he had appointed in Jerusalem was displaced by a revolt.  His response was to side with the Hellenized Jews, and to fight back against the Maccabees.  Regardless of his motivations, what followed was religious suppression of Judaism uncharacteristic of Greek rule, and notably unmatched outside of Judea and Samaria, where Jews could worship however they wanted to.  The religious oppression was political.

Political or not though, it was very real.  The story of Hannah and her seven sons who were all tortured to death for refusing to eat pigs that had been sacrificed to Zeus may or may not be true, but it stemmed from very real persecution that was violently enforced.  Not cool.  No one should be forced to worship against their core beliefs.  But were the Maccabees any better?  After all, they killed Hellenized priests for introducing pagan practices into the faith, and they routinely forced Jewish parents to circumcise their infants whether they wanted to or not.  They were zealots.  That's not cool either.  I certainly have empathy for anyone struggling under religious persecution, and I appreciate that this is what most people celebrate during Hanukkah today.  But in my mind, dogmatic faith that leads to violent enforcement is incredibly dangerous in any day and age, so I'm extremely hesitant to honor the Macabees as religious heroes.  And it would seem that ancient Rabbis were too, which is probably why these stories did not make it into their canon.

Your religious freedom ends where mine begins, and visa versa.  I've been reflecting on how history is written by the winners.  The Macabees won, and their zealotry is often excused, or worse, forgotten in a celebration of winning the freedom to keep all of Judaism pure.  That freedom came at a cost to the individual Jews who would rather have evolved with Hellenistic practices.  This is why I am a supporter of a separation of church and state.

Having said that, intent is extremely important when considering how and especially why holidays are celebrated.  The history of Judaism is a history of religious persecution, particularly in recent years.  Like all peoples, there have been times of oppression and times of oppressing, but when I look at what the Jews have gone through in the last century especially, I am truly empathetic.  The intent of those who celebrate Hanukkah today is not to honor the zealotry of the Macabees, but to honor that their way of life would be preserved.  I think it is a beautiful thing that Jews can celebrate their heritage in a holiday that Americans recognize and honor.  It is a way for Jewish children to feel culturally validated in the midst of the overwhelming presence of Christmas.  The lighting of the Menorah at the White House is a way Americans can honor Judaic culture within our midst, and welcome Jews who have been persecuted elsewhere.  And I'm happy to eat fried foods and talk about the beautiful Judaic culture and history with my kids during Hanukkah if that is the way America has chosen to pay tribute to them.