Today, perhaps the yule log is probably most familiar as a premium rolled sponge cake, or perhaps as a funny YouTube video spinoff of the 1966 TV broadcast of a fire burning in the hearth for 3 hours.  But the history of the yule log has more variations, some once far more popular than the decadent pastry.  It's origins are shrouded in mystery, but we can still play a game of "What do we know?" 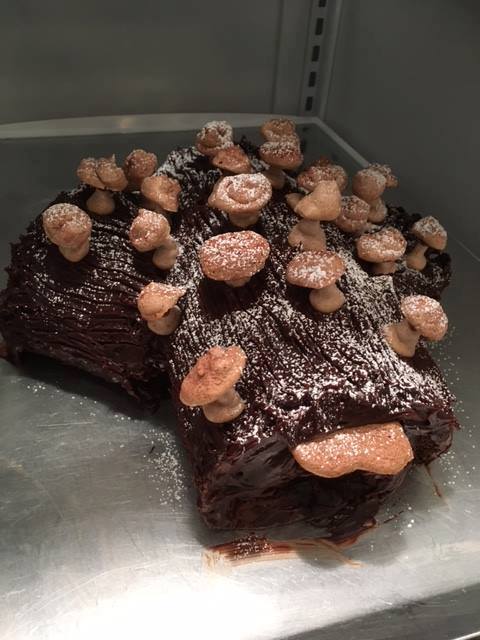 Originally Yule Logs were much bigger

It is believed by many, but not known, that Yule Logs hearkened back to ancient bonfires held during ancient Pagan festivals.  Whether this is true or not, there are many superstitious beliefs around burning the log.

In a nutshell, the tradition was this:  Find the largest log you can find, cut it down, drag it into your home, often giving the littlest people a ride, and begin burning it on Christmas Eve.  The Patriarch of the home or community would give a toast, pour a libation on the log of either warm cider or spirits, start the fire with the last bit of the last year's Yule log, and on it would burn for days.  It was considered bad luck for the log to go out before it had burned all the way through.  While it burned, folks would gather around the log telling ghost stories or singing merry songs.  Cider would be shared, and it would be a comfortable place to sit while eating ones' Christmas feast.

One of the beliefs in Nordic times was that Thor would not strike burnt wood with his thunder.  This is one of the reasons the last remaining piece of the yule log was kept and stored under the bed until it was brought out for the next year.  But a more touching reason was that by connecting the Yule Log in this way from generation to generation also connected all of the memories a family would make in front of the fire.  The Hearth was one of the most sacred places in the home, and a special fire like the Yule Log, with all the stories that came with it, would help connect the family with their past, both recent and ancient.

The Yule Log remained a popular Christmas tradition until modern indoor heating changed the need for a roaring fireplace.  In time the French introduced the Yule Log Cake as a popular substitute, while others chose to decorate their homes with a smaller log, sometimes with holed drilled in for taper candles.

Many blog posts mention how in the deep south, work was slow on the plantations, and all slaves would get a vacation as long as the Yule Log burned.  It was the slaves themselves who had the honor of picking the tree out and bringing it in.  So it was in their best interest to find the largest, wettest tree they could find and maybe even drag it through a ditch on the way to the house if they could get away with it.  There was a popular saying that something was as "wet as a Christmas log".  It's heartbreaking to think that one's vacation would be dependent on finding a big tree branch, but it was still a joyful time for them as they looked forward to socializing freely among themselves.

An alternative the yule log was the ashen faggot.  Branches from an ash tree, preferably the same one, were bundled together with nine rings holding them together.  The video below is slow and perhaps a little boring, but it illustrates just how big these bundles could be, and shows the folksy feel the burning would have with music and socializing.  It's certainly more entertaining than a lot of Yule Log videos out there at least!   Like the yule log, traditionally the ashen faggot would be started with the remains of the previous year's faggot.

The funniest variation I stumbled across is the Poop Log from Western Spain.  One brings in the log on December 8th, feeding it nuts and fruit to fatten it up.  Then on Christmas Eve, you cover it with a warm blanket and sing a song to it, telling it to poop out candies and presents, all while children take turns beating it with a stick.  When the blanket is removed, there are presents underneath.  I mean, everyone's got to do Christmas their own way, right?

When I first decided that I was going to make a Yule Log Cake, I was very intimidated by the idea, but I loved the tradition behind it so much I knew I needed to try.  I spent a few days watching several YouTube videos and reading recipes trying to get a feel for how to do it.  Sponge cake?  Rolling it up?  In the end, it was time consuming, not going to lie, but it was also much easier than I thought it would be.  The chocolate ganache frosting is very forgiving and hides a lot of cracks that may sneak into the cake.  I bought a mesh tea strainer especially for the sugar-powdered "snow" that really brings out the texture of the bark.  The most helpful tutorial I found was from Joy of Baking, although I cheated in subsequent cakes and used a cake mix for part of it.  Meringue mushrooms are fairly easy to make too, but they are also time consuming, so if you decide to make them, I suggest doing them ahead of time.  I also recommend NOT storing them in the fridge with the cake like I did the first time.  Store them in a dry place and add them to the cake right before serving.  I didn't have a frosting pipe, so these mushrooms were made with a gallon-sized zip-lock bag with a hole cut out of the corner.  They didn't look as uniform, but neither do real mushrooms.  I used the same tea strainer to sprinkle cocoa powder on the top, which really made them look more real.  I really think this special treat is worth the extra effort to bake.  It was a smashing hit at all the parties I've brought one to, for the look, it's exquisite taste, and the fun history behind it. 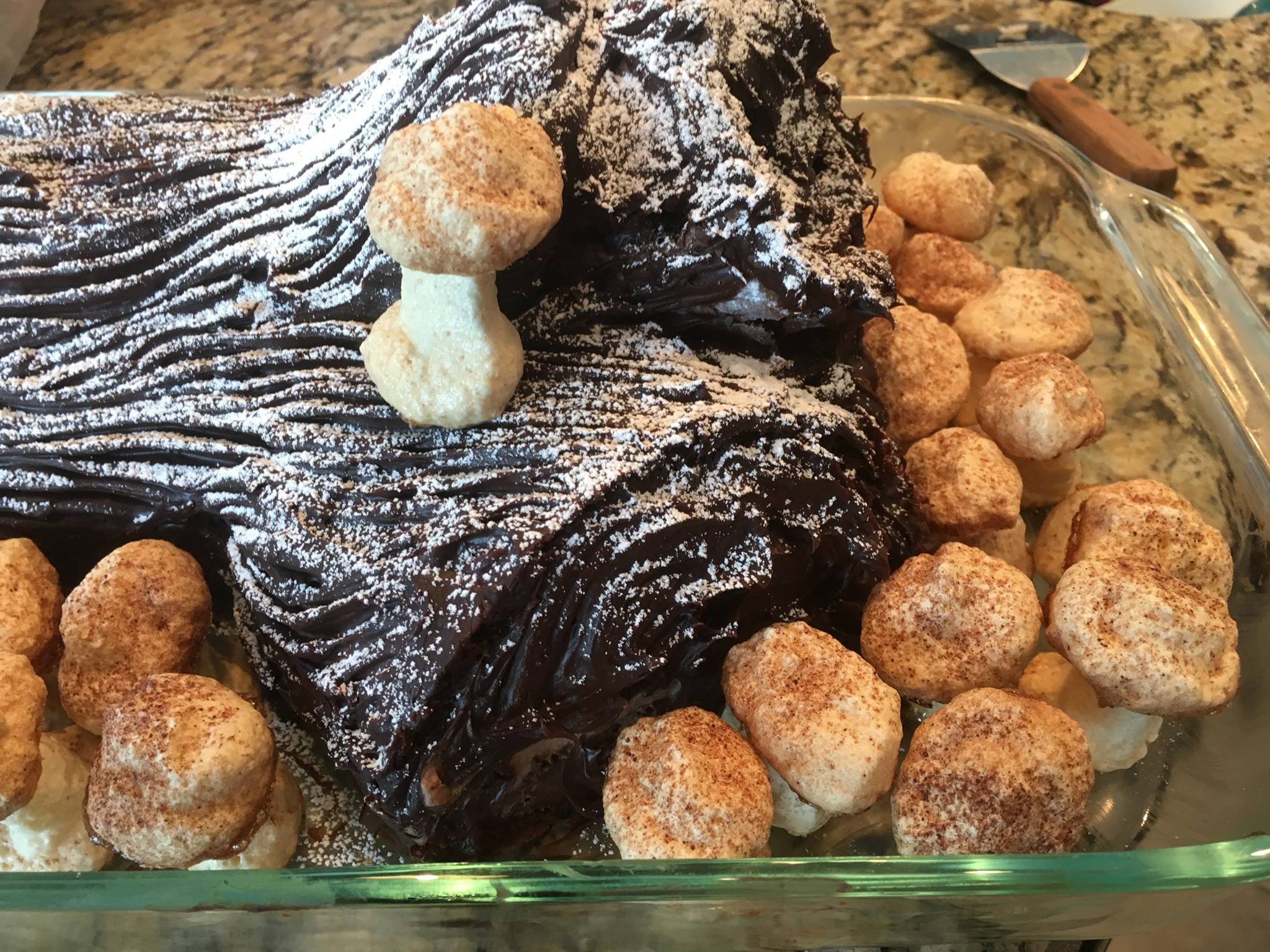 Yule logs have such a rich history, both in it's mystical, mostly unknown pre-Christian roots, through it's variations, and on through modern times, surviving as a dessert and YouTube sensation.  I suppose baking a cake is far easier than dragging in a gigantic log and finding a way to burn it while keeping the house from burning down with it.  In the end, both can lead to warm and enchanting Christmas memories with your family, and that is a fitting way to remember Christmases long, long ago.