The History of Candy Canes

Candy canes are such a part of Christmas that even other kinds of candy are now sold in tubes shaped like candy canes.  Why are they so popular?  Candy canes are a relatively recent invention, with myths about their origins that likely aren't true, and true stories that are equally worth telling.  So let's get started! 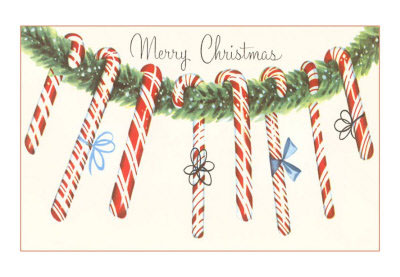 The popular story behind the candy cane's origin was that in 1670, a choirmaster at the Cologne Cathedral in Germany wanted to entertain the boys during a nativity reenactment, so he was going to give them candy sticks.  However, the church frowned upon the idea for frivolous reasons.  So this choirmaster decided to make an object lesson out of the candy canes and shaped like a shepherd's staff (or, in other versions, a "J" for Jesus).  The red represented the blood of Christ sacrificed for our sins, and the white represented purity.  In spite of the wide-spread popularity of this story, there isn't much evidence to support it, and the legend itself does not appear in writing until the mid 20th century.

What we DO know, is that hard, sugar-pulled candies have been around for thousands of years, that they were originally used for medicinal purposes ("A spoonful of sugar helps the medicine go down" and all that), and that as sugar became more accessible in medieval Europe, so did the candy's popularity as a sweet for sweet's sake.  The modern Christmas Tree made it's debut in Germany, and was decorated with cookies and sweets.  It is likely that the crook in the candy cane was invented in Germany in order to make it easy to hang on the trees.  The first candy canes were pure white.

We also know that pulling sugar was popular in the 1800's as a party activity, known as candy stew, and I'll speculate that homemade candy canes may have been a Christmas variation when making candy sticks.

The Candy Cane Gets it's stripes

The Swedish candy maker Amalia Erikkson in 1859.  She was 35 years old and recently widowed.  She needed to support her family and got permission from her city to open a sweets shop.  She was the one who gave pulled sugar it's stripes.  Her first ones were red and white, and peppermint flavored.  They were a big hit and soon she was doing very well.  She called her candy "polkagris", which means "polka pig".  Polka of course is a folk dance, and the twists in the peppermint candy resembled the spinning of the dances.  "Pig" was a common term for candy at the time.  In time Amalia's striped candy invention made it's way into modern candy canes sometime around the year 1900, a best guess based on greeting card art.  Millions of people go to the small town of Granna every year to buy her candy and celebrate the invention of striped candy, so I have to say I was very disappointed in how many Candy Cane articles and videos did not mention her.  "No one knows where the stripes came from".  Yes.  Yes we do.  An industrious entrepreneur invented them, rose from rags to riches, all while supporting her family as a widow.  She deserves far more credit than we have given her, so I'll say her name again.  Amalia Erikkson, Swedish confectionist extraordinaire.

For anyone disappointed that candy canes probably didn't come from a Catholic Priest, here's a consolation fact:  Candy canes were difficult to make because bending the hook came at a stage when the candy was cooling and was getting brittle.  Many candy cane attempts had to thrown away, and candy canes were only sold by private candy makers.  As such, they were a little more expensive.  People were familiar with them, but they were a rare treat.  A Catholic Priest named Gregory Keller changed all that in the 1950's with his invention that could mass produce candy canes on a wide scale.  And thus was the candy cane industry born.  Candy canes were now one of the cheapest Christmas treats to make, they hang on Christmas trees easily, and the generation of children to have them widely available were the baby boomers, so there's a special nostalgia that has kept them going.

I'd like to close with this fun video of how factory candy canes are made.  I love videos like this because there are so many inventions at work here, not just Keller's, not just Erikkson's.  People are smart and find solutions for so many problems that many of us don't even know exist.  Something fun to think about next time you eat a candy cane.  How many people were involved in bringing it to you?