As a follow-up to my soroban post, this is the primary thing we are doing now.  I told my mom how cool I think the soroban abacus is and she showed me a neat homeschooling site called thehevproject.com, which has short and sweet abacus training videos with 15-problem worksheets after each lesson.  There are only 33 lessons, but that’s plenty to get our feet in the door so that’s where we are starting.  I’m looking forward to telling you more about this website in an upcoming post.  When I saw the abacus in the video, we went ahead and bought two Japanese Soroban Wood Abacus from Amazon (one for each of my older kids), got on hev’s monthly plan, and today Peter finished lesson 10.  Helen will start next week.  So far so good.

Last Christmas we were working on multiplication.  We bought the flashcards and played games on www.multiplication.com.  Helen really liked the stories but Peter never really engaged with it.  Now we’re doing soroban, but when we get back to learning our tables, I’m going to really dig into this site.

Thanks to the advertisements, I noticed www.bigbrainz.com.  We downloaded the demo and Peter BEGGED me for the full version.  We got the 3-month subscription for Christmas and they really loved it.  The catch for us was that I played the game with the kids and told them the answers.  That’s just where we were at.  I told my 5-year-old the answer like this, “eleven times six is sixty-six”, and he would have to type it in.  My 3-year-old got to hear “sixty-six”, and my 2-year-old got to hear “six, six”.  I passed the biggest bosses for them all.  They all had fun, and all of them became very good at typing numbers quickly.  It was a great approach except that it backfired a little because after they had each won that way, none of them wanted to play the game anymore, so we let our subscription laps.  Maybe we’ll come back to it.  My personal thought:  it’s very much like a video game, and I have mixed feelings on docking kids as much for falling off a a machine as they do for missing a problem.  The graphics were fun.  I had fun playing it.  I never mastered my 12 times tables past 5 until I played the game myself.  Now I’m sharp as a pin with all my multiplication facts up to 12.  Ta-da.  It worked for me!  Maybe not the best thing for the early learning crowd unless you alter the game like I did.  Then again, maybe your EL kids are sharper than mine.

The kids seem to be benefiting a lot from our family subscription to more.starfall.com.  There are some really cute math songs and games there.

I would love to spend some time exploring http://wholemovement.com/.  I am amazed at what can be created and and learned by simply folding circles.

The kids love Mr. Numbers on YouTube, and again, when we get to our times tables, I’m going to dig deep into http://www.patternplaymath.com/.  I like the idea of using more than one approach to teaching, and I love what he has done.  His materials are very affordable too.

Before I got into Soroban, I printed out Ray’s new primary arithmetic for young learners.  (Thanks to nee1 on BrilldKids for pointing this out!).  There are 89 lessons with between 15-30 problems each.  They seem like good practice questions, so if money is tight and you want a step-by-step approach, this will do the trick.  I still plan on making sure that ink wasn’t wasted.  I think a child who completes this book will be ready to advance to Saxon 5/4.  🙂

Speaking of Saxon, my plan is to use it as soon as my kids are ready for Saxon 5/4.  Did you know that Saxon himself didn’t write Saxon books for the earlier grades?  Well, he didn’t.  The company that ended up with the rights to his books did so they could make more money, and the general consensus I’m getting is that they aren’t as good.  My father-in-law didn’t like the 1st grade material when he used it at a private school.  I don’t want to use it for the early grades.  I want something more hands on.  Like the soroban!  But after reading and following this thread, and then reading Robert Levy’s reviews of Saxon math on Amazon.com, I am quite sold on using it for the upper grades.  I’m on track to begin Saxon 5/4 in about a year.  I think I could do it sooner, but I really want to focus on abacus training and developing mental math skills.  My plan is to finish the hevproject lessons, then do Ray’s book with the aid of the soroban, supplementing with other sources as wanted, then the “in a nutshell” 3rd grade math on hevproject, and on to Saxon 5/4.  I’ve got a plan, and I LOVE having a step-by-step, know-what’s-next plan.
Edit:  They say that to start Saxon 5/4, all a child needs to know is how to add and subtract two-digit numbers, and your multiplication up to 10.  Young children who know this information do well in Saxon 5/4, and it is thorough for other math topics.  Saxon designed 5/4 to be his beginning math book, and as such, it is comprehensive.  Starting 6-year-olds with the 5/4 book is not uncommon in the BrillKids community for this reason.  I promise I’m not a draconian drill-to-kill mom.  My kids actually really enjoy math, but I wouldn’t call them a math whiz.  What I am suggesting, what I am using, is an accelerated math path.  Saxon is very good for this.  For more information, read the thread I referenced.  🙂

For the younger kids.

Once upon a time, when I had but one baby, I read Glenn Doman’s “How to teach your baby math.”  Then I did something crazy.  I bought $40-ish worth of materials and painstakingly made my own math-dot cards.  I was crazy.  And stupid.  Shortly after finishing I found a site where I could have just printed them out instead of using stickers.  Really?  All that time down the drain.  :'(  You think I’m joking?  It was such a pain to check to double check to make sure each card had exactly as many dots as I thought it did.  I placed thousands of dot stickers.  Stupid.  Don’t do that. Technology means you don’t have to, there’s plenty of free resources out there.  Check this article out for more information on Doman’s math dot program. 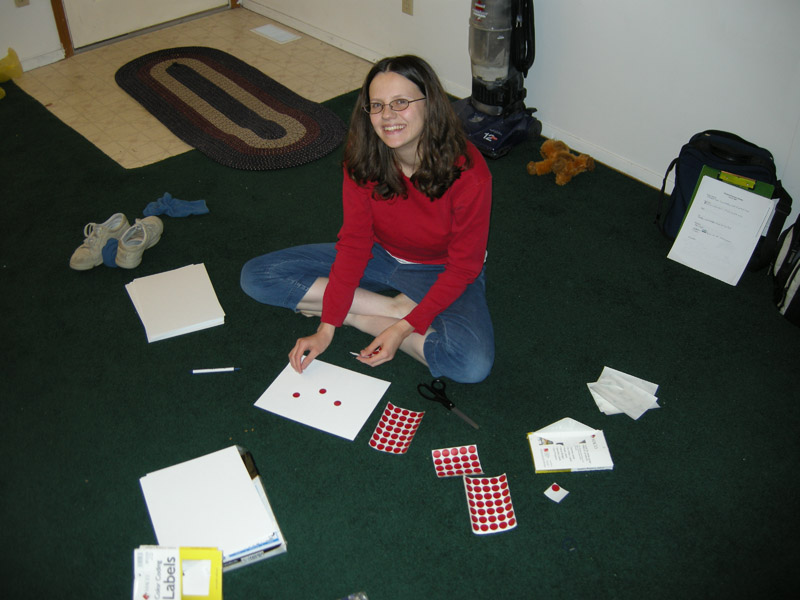 I have a hard time trying to make the sale when it comes to BrillKids Little Math program.  Why?  Because I know it doesn’t always work.  Little Reader and Little Musician are simply amazing, and I have perfect confidence that they will work so I freely endorse them.  Little Math, I’m not so confident about.  Certainly there are cases where Doman’s dot program has worked remarkably well, such as here, but youtube isn’t littered with success stories like it is with babies reading.  One theory as to why this isn’t the case is because parents can’t reinforce it when away from the learning materials.  We can say, “Look, that sign says stop”, and read cereal boxes to them, but we can’t say “Hey, look at those 46 sheep in that field”, or “Hey, you spilled 53 cheerios on the floor.”  Maybe that’s part of it.  I am convinced that using Little Math with my young children has been beneficial for my children, and that all early exposure to learning has its benefits.  Nothing is wasted.  But it’s a hard sell.  I don’t think I would have purchased it without my deep understanding of Doman’s work, of how babies’ brains develop, and how my kids don’t have to demonstrate the ability to quantisize big numbers for the program to be successful.  So there you have it.  If you want to be sold on BrillKids’ Little Math program, read Glenn Doman’s math book and know that Little Math does all of the work for you, all you have to do is push play and there are cute icons that flash for you and keep track of everything.  If you read Doman’s book and want that for your child, get Little Math.  That’s it.  I’m not going to try to sell it any more than this paragraph.  Someday soon maybe my baby will demonstrate that she’s a math whiz and I’ll change my tune, but in the meantime I’m content to say that we have Little Math and we faithfully use it.  It’s very well done.

TweedleWink also incorporates the math dots into their lessons.  We bought the whole package and we really love it- full review coming soon.  🙂  Also, Your Baby/Child Can Discover incorporates math in an engaging way that we really love.  These programs aren’t “sit down and do math” videos, but they are part of our overall math enrichment, so I share them here.

Math Games and Activities is an awesome book I stumbled upon and we’ve used it a lot.  Fun with tangrams also stemmed from this book.

A friend in my local homeschooling group shared this.  It’s so cool.  Math is beautiful.  I made a printout for this and we’ve played with it with clear glass pebbles.  They place them, for example, on numbers divisible by 3, and it’s a self-correcting activity because it makes a pattern.
http://www.datapointed.net/visualizations/math/factorization/animated-diagrams/
And here’s a blog post with a few ideas on how to use it:
http://mathinyourfeet.blogspot.com/2012/11/new-math-game-factor-dominoes.html
She references this blog, which has a higher quality image for a print-out:
http://mike-naylor.blogspot.com/2012/11/factor-visualization.html

We play with pattern blocks a lot.  It’s mostly free-play, but we do have some pictures they can place the pieces on.  There are some awesome teaching ideas for pattern blocks on this channel:  https://www.youtube.com/user/erloakland/videos.

Products I would get in a heart-beat with a dream budget:  Math-U-See (we only have manipulatives and a decimal street poster, not the actual lesson books and videos), Mathtacular, Touchmath, Rightstart Math, and I definitely plan on getting Hands on Equations.

Phew!  I hope there’s some gold nuggets in this article for you.  🙂