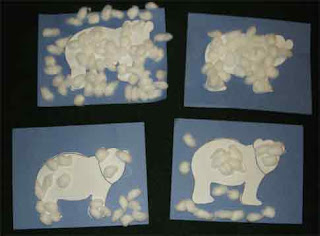 About a year ago, my youngest siblings made these polar bears with my son.  We printed out the template from www.thebestkidsbooksite.com, cut and glued them onto blue construction paper for contrast, and had fun gluing cotton swabs to them.  We found that the most effective way for the younger children to do this was to have them dip the cotton into a small tray of glue, instead of gluing the polar bear.  Some of the kids wanted there to be snow in the picture.  Sometimes the joy is in the doing, not in the results.  :o)

This was part of a unit study on polar bears.  We also read Whiteblack the Penguin Sees the World from the library and discussed how penguins and polar bears do not live together and showed the kids where polar bears live on a globe.  We showed pictures of polar bears from the National Geographic magazine, and said a polar bear rhyme similar to the one found here.  We also snacked on fish crackers because polar bears eat fish.  I think that unit studies like this are especially helpful for introducing new concepts to younger children.