Adapting Math-U-See for the pre-primer crowd

Share0
Tweet0
Share0
Share0
Tweet0
Share0
I had a friend who recently introduced Math-U-See to me, with the recommendation that children learn their numbers and numerals up to nine before beginning.  This was good advice.  As I poured through the Introduction to Mathematics book (now replaced by the Primer) and became excited about the program, I realize that they need this foundation before being ready to begin the formal program.
Therefore, my goal is to teach my three-year-old his numbers up to nine.  As I contemplated how to get him there, I decided that the answer is quite simply to play with the Math-U-See blocks with my children. 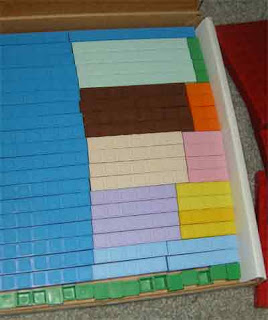 In the beginning, I referred to the blocks by their number and color.  “Will you please hand me the orange two block?”  After a couple of weeks, I just started asking for the number, and if he was confused, I would clarify by telling him a color.  In a way this is teaching him to associate numbers with colored blocks, but this information is being used in the real world too.  In the month that we started playing with the blocks, he has gone from understanding two to understanding four.  If I give him three raisins and his sister four, he will complain using real numbers.  Although he knows that the violet block is “six”, he still doesn’t recognize six objects in a different context.   But understanding six in any context is pretty good for a three-year-old, and further understanding will come with practice.

Building Walls
This activity has even worked with my 22-month old.  I will choose a larger block, like nine or ten, to build a wall on.  Then I will place a slightly smaller numbered block and ask my children which block I need to finish the row.  My son is often involved in his own building project, and will shout out “three”.  My daughter is more excited to help me, and grabs me a pink block.  She recognizes the missing space up to three, but struggles with four or more.  Since she does not even say her numbers yet, I think this is a great start.  My son can do it with all of the blocks now.  He reached this mastery by building his own walls.  We build ten walls, nine walls, eight walls, and so on.  My daughter prefers to make her own six walls, because violet is so pretty. 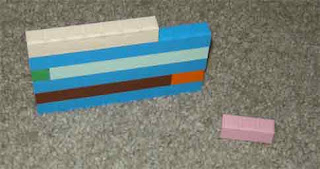 Unit Puzzles
I made these puzzles to teach quantity and numeral recognition.  Procedure?  Give the child a handful of unit blocks, tell them the name of the puzzle that they are doing, and let them place the blocks on the cards.  They are willing enough to do these puzzles if all I give them are unit blocks, but if the rest of the blocks are within reach, they won’t touch these.  I only occasionally pull these out, but I have had good results.  Those familiar with the Math-U-See program will recognize this format, I have simply repurposed it for my younger children.  You need Math-U-See blocks to do these puzzles, but if anyone is interested, feel free to print these out and use them.
0-4 pdf
5-9 pdf

We love Math-U-See, and we haven’t even started yet!  In the future, we will be purchasing more blocks, and using their full curriculum.  It is amazing to me that these manipulatives can be used from the pre-primer stage all the way through algebra.  Playing with blocks is fun = Math is fun!