Then I wake up.  The truth is, my three-year-old son does not even have the attention span to play Candyland.  Before he was two, he knew his basic colors inside and out, and so when he was 2 1/2, we gave him Candyland for Christmas.  He thought that the board was cute, and that the little gingerbread men were fun toys, but we ended up putting it away.  Even now, his version of the game is to walk the gingerbread men down the path and to talk to all of the characters as they journey to the king.  We managed to play half of a real game once, then he threw the pieces all over the floor and said “The end!”  Fair enough, we put it away.

There is something that I heard Susan Wise Bauer say 10 years ago at a homeschooling conference that means more to me today than ever before.  She said: “There is an intellectual maturity than can be given to children through a superb education, and then there is a social maturity that only happens when they’ve gone around the sun a few times.”  I find myself thinking these words all of the time.  What was my goal in presenting Candyland to my son in the first place?  He already knew his colors.  Sitting down to play a game like that requires a certain social maturity that he just doesn’t have yet.  Next year I’ll probably be rolling my eyes at this article because it will be all that he’ll want to play.

When my son was a baby, I saved this article from the Mothering magazine and decided that I would introduce chess to my children when they were three.  That was before I had heard of Doman or any of the other early programs.  Studies have shown (that’s vague, I know, I’m not going find you a study for this post, sorry!) Ahem!  Studies have shown that children who play chess do better in math and science, and overall academically than their peers who don’t play chess.  I believe it.  My family loves chess, and my children are often exposed to it when we visit them. 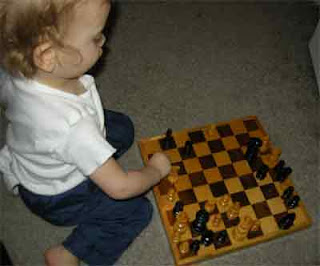 Going back to the social vs intellectual maturity idea, what can you teach a preschooler?  What are they intellectually ready to handle?  I’ve put it to the test with my son and here is why I have found: 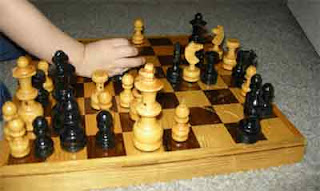 Where do we go from here?  As soon as he can play Candyland, I will introduce him to Lincolnshire chess (referred to in the Mothering article as “The Pawn Game”).  When he can play Candyland, he will have mastered the art of taking turns, he will understand that somebody wins and somebody doesn’t, and he will have the patience to see the game to the end.  Here is a video showing how to play Lincolnshire chess.

As a side note, Frank Ho from math and chess shares a kinesthetic way of teaching how the different pieces move.  I can’t wait to try it!