Imbolc and the first signs of Spring

Imbolc (pronounced "eem-olk") means "In the belly", and refers to the beginning of lambing season. A time when the first lambs are born, and a time when the ewe's milk begins to flow. More broadly, Imbolc celebrates when the first signs of Spring can be seen.

Blessed Imbolc!  Winter can be very long in Utah, and with the festivities of Christmas behind us, and a long semester of homeschool ahead, January and February used to be the time of year I dreaded most.  Brigit has really blessed my life by reminding me to look for the very early signs of Spring​, signs that the winter will soon end, in spite of the cold.

Imbolc is also known as "Brigid's Day" because it honors the goddess who ushers in Spring. When Christianity came to Ireland, she was so loved that in order to suppress the goddess aspect of Brigid, they made her into a saint, whose feast day​ are celebrated on the same day. Yet even as a saint born around 500 AD, she still was given divine abilities as she was given an important role in Christ's life. She was said to be Mary's midwife, and milk nurse to the Christchild. When Mary, Joseph and Christ needed to escape to Egypt, Brigid bought them time by distracting Harold's men by wearing a crown of lights on her head. In ancient tradition, the crown of lights Brigid wears is because she is a solar goddess who brings warms and sunlight back to the earth to herald in Spring.

Another holiday celebrated this time of year is the Christian Candlemass.  It was a celebration of the purification of Mary (40 days after Christmas).  People would be busy making their candles before Candlemass so they could bring them to church to be blessed for the year.  We made candles last year to celebrate and it was really fun.

​Another fun aspect of Imbolc was weather divining. Cailleach was a divine crone who helped create the world and controlled winter. If she wanted winter to be longer, she would make the weather on Imbolc particularly warm so she could go out and gather more firewood. If she was tired of winter, she would stay in bed and the weather would stay cold. Doesn't that make a lot more sense than Groundhog Day? At least, it makes more sense that if the groundhog sees his shadow there would be more winter knowing this history.  Some historians say that Groundhog Day has nothing to do with Imbolc, others think there is an unmistakable connection.  I believe there is, but I suppose it is up to individual interpretation.

​I was most drawn to Imbolc because of the cosmic symbolism in the crown and Brigid's wheel. We ​have a lot of Irish in our heritage and Imbolc seems to have survived the best in Ireland today. Brigid was widely known in the ancient world though- Britain is a derivative of her name, as well as Brittany in France. The "bride" in bride and groom also bears her name, so there's a lot of history in these holidays that will be particularly interesting to those of Northern European descent. 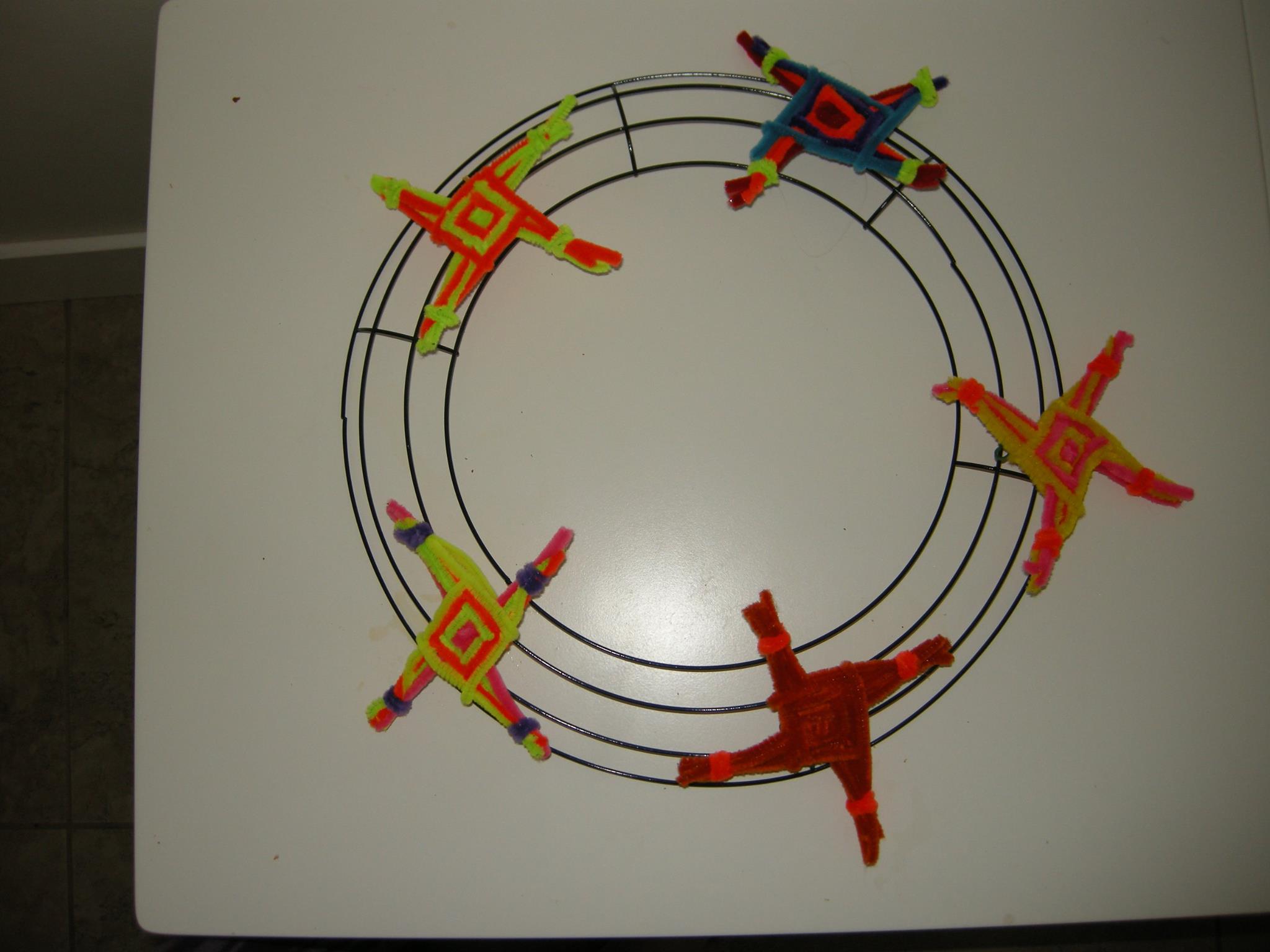 ​The kids made these Brigid's crosses out of pipe cleaners. These crosses represent wheels of fire and were solar in nature. People would make these crosses out of reeds, grasses, or wheat stock. They would hang them over their hearths at Imbolc and leave them there, to be replaced by a new one the following year.  There are many tutorials available on YouTube. 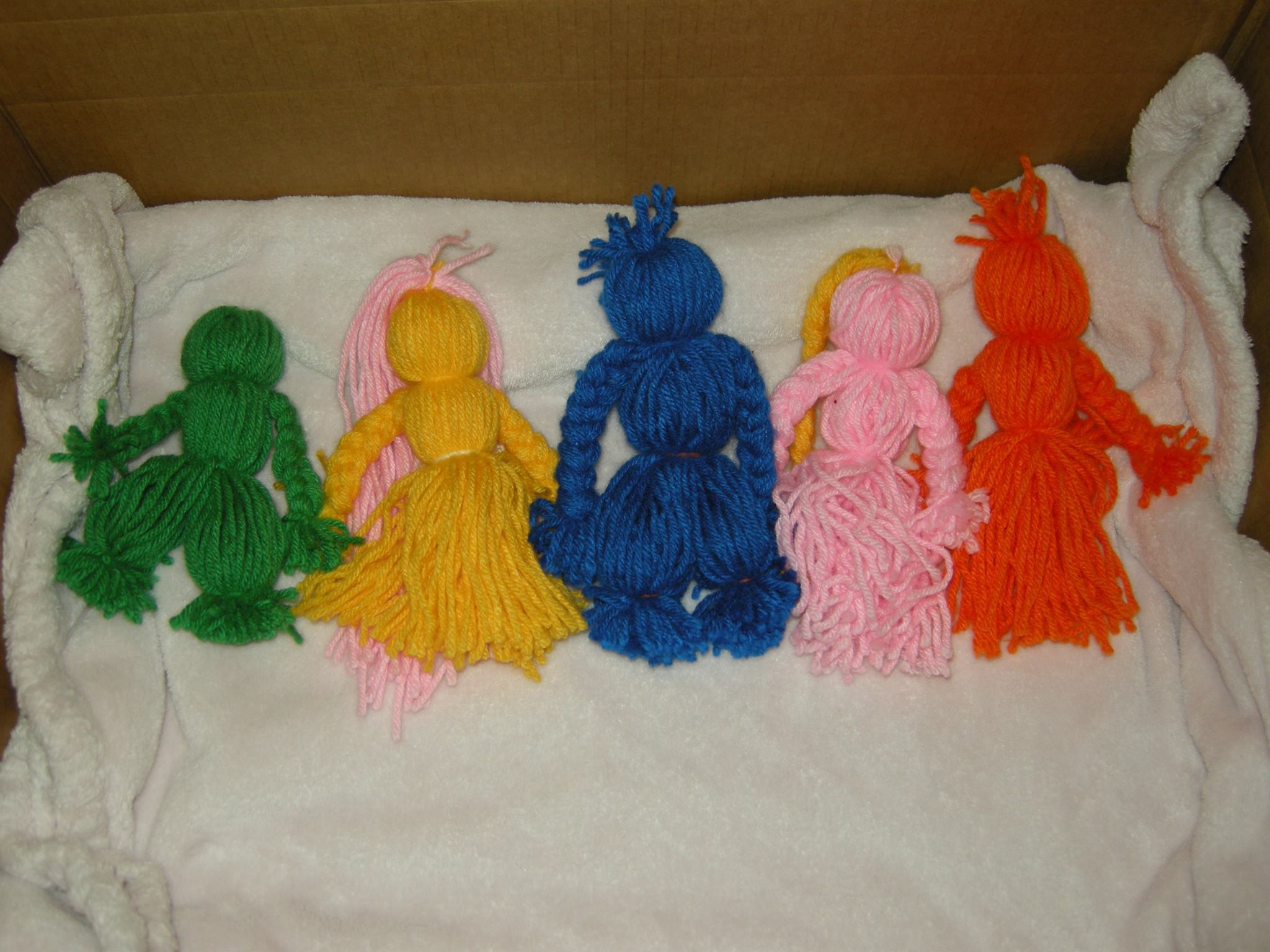 Each of the children made a yarn doll (with lots of Mommy help as applicable). Traditionally a Brigid doll was made from corn husks or other natural materials but this is what was handy at Walmart. Girls would take their dolls from house to house as their neighbors would give them beads, scraps of cloth or other items to decorate their dolls, or they would give the children a snack. Then the young men would ask if they could join in the fun and there would be a celebration. At night, the dolls would be put in a bed and the doll and bed represented Brigid with the hope that Brigid would visit that night and bless their home. 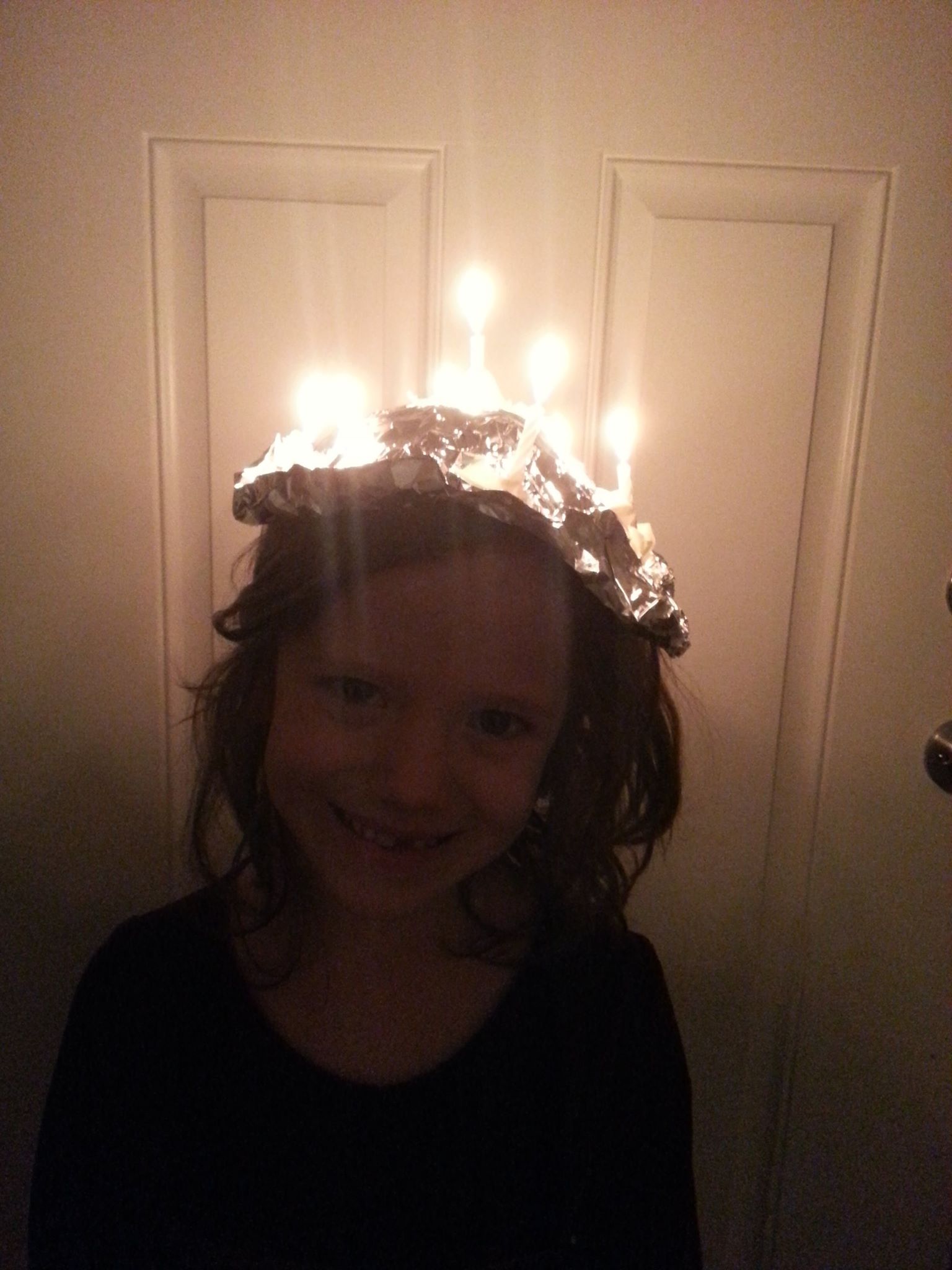 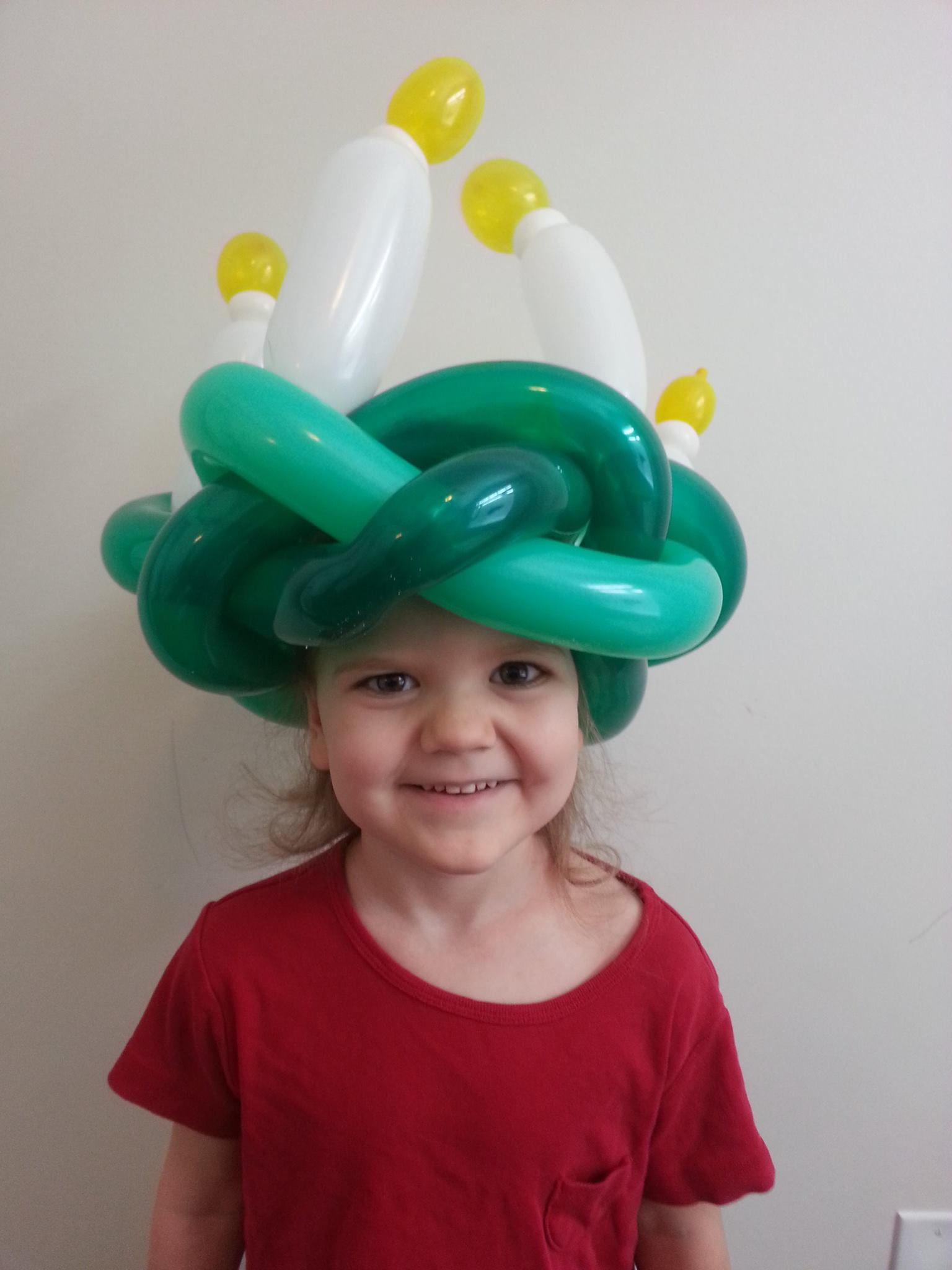 Our last activity- making a tinfoil hat for my daughter so aliens can't read her mind. Er, that is making a make-shift candle crown. I taped tin foil onto a headband, shaped into a hat with a lip to catch any wax, and taped 7 birthday candles. It looked silly in the light but looked really neat in the dark while my son read an Imbolc poem. This was all really fun- I think we'll do it again next year!  The balloon creation was a great project for me personally, and was fun to complete in light of the history I've been studying.​

​Laurels with candles like this are often called Lucia Crowns as Sweden, Denmark and Norway celebrate St. Lucia day on December 13th and the crowns are best known from that celebration. However, the crown has Heathen origins. It has special Celtic/Gaelic significance associated with the godess Brigid, especially for Imbolc. ​ The sacred nature of 7 lights/stars has significance for many religions worldwide. I was very excited to learn about this crown. We may not know a lot about the personal lives of our ancient ancestors, but by learning and honoring their customs, we can connect with our past and teach our children about their heritage.

While Imbolc and the surrounding holidays I've mentioned are of historical interest to all homeschoolers, especially of Irish decent, Pagans are ones who have done the most to keep the old traditions alive and I found their parenting and even homeschooling resources to be the most helpful.  I found some beautiful coloring pages to give the kids from this community too.

First of all, I want to give a shout-out to Pooka Pages.  I print out their children's magazine for my children for all of the holidays, and my girls especially have really grown to love it.  So much love goes into the pages.

Another good resource is the coloring and activity pages available on Little Pagan Acorns.

​For those who want to dig a little deeper, there are two books that were recommended to me that I in turn would recommend for anyone interested in learning more about the earthen holidays that make up the wheel of the year.  I am not a wiccan personally, but Wicca Wheel of the Year is a great overview of all of the holidays, with some of the basic stories, customs and suggested menus provided.

​My favorite book has been the classic Circle Round: Raising Children in Goddess Traditions by Starhawk, Diane Baker, and Anne Hill.  There are so many fun stories in this book, designed to be read aloud to children.  When I first investigated paganism, this book really helped me, an adult beginner, to grasp the big picture.  There are also simple melodic songs, which we have enjoyed singing before bedtime.