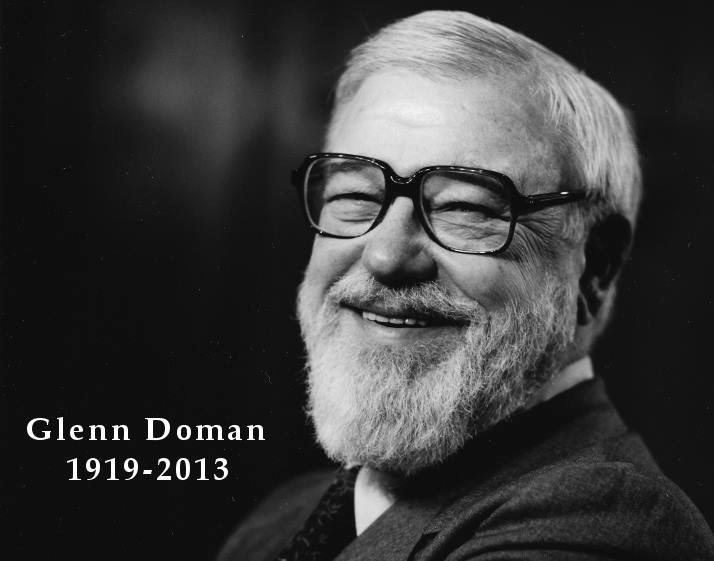 The world lost a great man this week.  It has been an emotional time for me as I contemplate what this man has done for my family, and the depth to which he has touched my life.  I can’t imagine how different our family life would be if I had never heard of him, if I had never touched on his research, read his books, or changed my entire parenting philosophy as a result of his life’s work.  I love him.  I love him so much for the difference he has made for me, for thousands of others, and his undying, constant love of children, and his firm belief in every child’s potential.  Because of his work, brain-injured children have been made whole.  Because of his work, well-children have become exceptional.

His work extends beyond the work of the Institutes for the Achievement of Human Potential.  Stemming from his research, companies such as Your Baby Can Read, Monkisee, Right Brain Kids, and BrillKids, with over 110,000 members in its forum, have taken root and spread the beautiful message that young children are a lot smarter than we give the credit for.  Spreading this love was his life’s work.  It is his legacy.  It is his gentle revolution.

Glenn Doman is a man I never met in person, but I love him like a beloved grandfather.  When I see his face, when I hear his voice, when I read his word, when I witness the awesome, beautiful change that has happened to my family, I am so touched with gratitude that he was born.  He died peacefully at 94, living a full, fruitful life.  I will not sorrow at your passing, for I do not think you would wish it.  I will celebrate your life, express my love to your family, and tell my children what an honorable man you are.  I am perfectly confident that you are very happy now, your life’s work accomplished.  Rest in peace, beloved man.  Your work will continue, your legacy carried forward by the lives you have touched.

I know I cannot do justice to my feelings, to my desire to share what a wonderful man he is.  But I can pay tribute to him by sharing some of his own words that have touched me.  Last night and this morning I have been pouring through five of his books which adorn my library to find a few of my favorite passages.  I ran out of time, but I found a few I hope you will find of interest.  But first, you can see him firsthand as he introduces the Institutes and what they do there.

Words of Glenn Doman from his books.

Tiny kids would rather learn than eat.
Tiny kids would rather learn than play
Tiny kids think that all learning is play.  They do not however think that all play is learning as most professionals do.  That is because a good deal of what adults regard as proper play for kids is downright silly.  Nobody fools kids.
TINY KIDS THINK LEARNING IS A SURVIVAL SKILL.
TINY KIDS WANT TO LEARN EVERYTHING THERE IS TO LEARN, AND THEY WANT TO DO SO RIGHT NOW.
TINY KIDS THINK LEARNING IS THE GREATEST THING THAT EVER HAPPENED. (1)

We are opposed to any brand of competition that dictates that I must score more points than you, I must overcome you – or prove that I am somehow superior to you.
…
We do teach our children here at The Institutes what we believe to be a higher brand of competition, one that goes like this: “If I want to reach some new higher level of mobility, one that I have never yet attained, only I can be the obstacle.  If I overcome myself and achieve my goal, then I have won.”  In short, we teach the children self-competition. (2)

Babies can learn absolutely anything that you can present to them in an honest and factual way and they don’t give a fig whether it is encyclopedic knowledge, reading words, math, or nonsense for that matter.
They’d prefer great things- reading, math, all the presidents of the United States, the nations of Europe, the great art of the world, the song birds of the eastern states, the snakes of the world, the kings and queens of England, the great music of the world, the international traffic signs, the dinosaurs, the state flowers, or any of the millions of fascinating things there are to know about on this old earth.
But they’ll even take nonsense if that’s all they can get. (3)

We hold these truths to be self evident,That all men are created equal,
That they are endowed by their Creator
with certain unalienable rights,
That among there are life, liberty,and the pursuit of happiness.

Intelligence is the degree of ability one has– to see the difference between the way things are and the way things could be and to make them closer to the way they could be. (5)

1. We can say, “Look, baby, Mommy has to get dinner.”
It will take at least thirty seconds to get rid of the baby and make that stick.

4.We can say, “That’s a dog called a collie.”
We can then go on to tell him thirty seconds’ worth of information which is precise, discrete, unambiguous, and true.

Number four is a fine answer and meets the requirements.
How sad it is that we put information into a computer with great skill and great precision and put information into our children’s brains in a hit-or-miss, slip-shod, sloppy, and often untruthful way.
Remember also that, unlike the computer, we can never totally erase the facts which we put into our baby’s brain.  They will remain as the first response available on recall.  They will remain if they are true and they will remain if they are untrue. (6)

It is worth remembering that you are not simply teaching your child all that is worth knowing in this world, you are also teaching your grandchildren’s father how to teach them.  It is a humbling thought. (8)

From the moment a baby is born, a struggle begins.  Mother does her best to keep her baby close to her, and the world does its best to separate mother from baby.
This is a mistake because mothers are the best teachers in the world for their babies.
…
There are strong forces at work to separate mother from child, and most people have come to regard each of these encroachments on mother’s domain as normal. It is as if that is the way it has always been.
But hospital nurseries, day care centers, and even compulsory education are not the way it has always benn for mothers and babies.  They are newfangled notions, and a radical departure from the age-old human tradition of children being with their mothers until they are ready, willing, and able to handle life on their own.
…
New cars come with owner’s manuals- new babies do not- and yet we all know that babies are a great deal more important than cars.  To be sure, there are manuals for the feeding and changing of babies.  There are books about the general stages of development that can be observed in average, healthy children.
But these aids are based on two main underlying assumptions.  The first is that the baby’s needs are primarily physiological and emotional.  The second is that baby’s development is triggered by the ringing of a series of genetically preset alarm clocks that go off on schedule regardless of what does or does not happen to him.
These assumptions are false.
It is perhaps because of these false assumptions that modern babies are being raised on accident instead of on purpose.  That is a great shame because the growth and development of the human child is much too important to be left to chance.
It is also because of these false assumptions that mothers have increasingly been persuaded, against their better judgement, to let their babies be cared for by others.
…
Mothers have know more about babies than anyone else since the world began.
It is mothers who have successfully brought us from prehistoric caves to the present.
However, the modern mother faces a very large problem: her own possible extinction.
She has the same powers of observation, the same intuition, the same insticts, and the same love for her baby that mothers have had throughout human history.  But she is threatened by a world in which it is no longer safe to be a mother.  In this world she must battle to keep her baby by her side from the instant he is born.  In this world she is often told that her baby is better off in a nursery than in her arms.
It is a world in which it is no longer considered fashionable or useful to be a mother. (9)

The brain grows by use.
…There is an old law of nature that says that function determines structure.The brain-injured child demonstrates that the opposite is also true.  A lack of function creates a lack of structure.We believed that if we could successfully treat the brain, the child would begin to increase his function, and that as this happened his structure would begin to change.
This is exactly and precisely what happened.(10)(This passage describes how brain-injured children are often small, but as they are properly stimulated, as they heal, they grow in size as well as intelligence.  This is true, whether the child is 4, 6, 10, or 30- the size of the brain doesn’t stop growing at age 6, but when it reaches maturity.  The brain does indeed grow by use.)

Reading is one of the highest function of the brain–of all creatures on earth, only people can read.
Reading is one of the most important functions in life, since virtually all learning is based on the ability to read.
It is truly astonishing that it has taken us so many years to realize that the younger a child is when he learns to read, the easier it will be for him to read and the better he will read.
Children can read words when they are one  year old, sentences when they are two, and whole books when they are three years old– and they love it.
The realization that they have this ability, and why they have it, took a long time. (11)

I shall devote a chapter to each of these four facts.  Each of them is true and each is simple.  Perhaps that has been a large part of the problem.  There are few disguises harder to penetrate than the deceptive cloak of simplicity. (12)

Millions of young women watched other women moving into what had been men’s jobs and professions.
However they found that they wanted a different sort of profession and a very different sort of life for themselves.  They discovered that they wished to be what we have chosen to call “professional mothers.”
It was not so much that they didn’t want to enter the male world.  It is that they wanted much more to be mothers.
…
They had decided that the best way to change the world for the better was not by improving the world’s institutions, but by improving the world’s people.  They controlled the world’s most important resource and raw material—babies.
…
They experience a sense of high purpose and take pride in their children and the contributions those children will make in the world.
They have expanded and increased their own knowledge and find that they are more confident and more capable than they were before they began to teach their children.
They expected their children to change but they were astonished to discover that they themselves have higher expectations and bigger goals for their lives as a result of being professional mothers.
Nice side effect, isn’t it? (13)