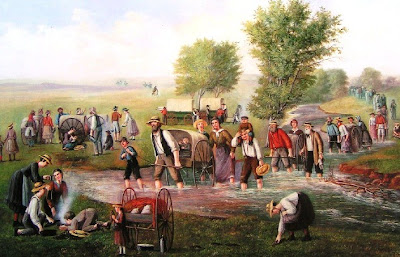 On the left in front of the wagon wheel a mother is nursing her toddler.  (C.C.A. Christensen)
Full zoom: 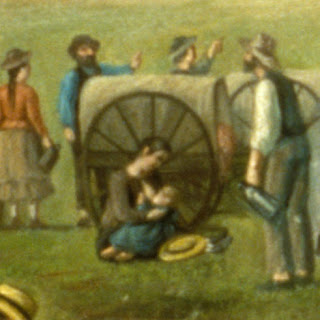 In the Cardston, Alberta temple, there are three nursing mothers in this painting:

The Seagull Monument at Temple Square: 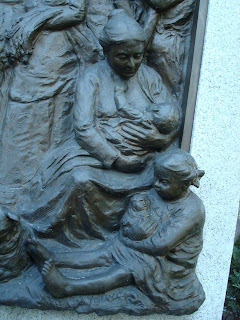 “Father Lehi Blesses His Posterity” by C.C.A. Christensen on display in Palmyra, NY: 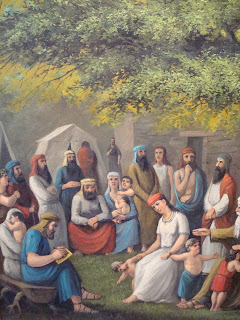 Here is one I found when I was reading the Book of Mormon scripture reader to my kids, in the chapter about Enos:

The church does not frown on breastfeeding in public among mixed company.  This picture, so recently published in a children’s book, confirms to me that children need not be shielded from watching the baby eat.
Now look at what the church has to say about breastfeeding:
From “A Parent’s Guide”:

The scriptures often refer respectfully but plainly to the body and its parts. There is no embarrassment and often there is sacred symbolism. It is the world that makes the divinely created body an object of carnal lust. For example, it makes the female breasts primarily into sexual enticements, while the truth is that they were intended to nourish and comfort children. It promotes male sexual aggression in contrast to Christ’s example of tenderness, long-suffering, kindness, and steadfastness in the home.

Shame about the human body, its parts and purposes, is justified only when a person uses it for carnal purposes. Teach your children that they will find joy in their bodies when they use them virtuously after the manner taught by Christ.

From “Nutrition for Mother and Baby” from The Latter-day Saint Woman: Basic Manual for Women, Part A

Our Heavenly Father made the mother’s body so it could produce milk. This milk is made especially for human babies to drink. It is better for babies than milk from animals. The first fluid that comes from the mother’s breasts after a new baby is born is also important. It contains substances that help protect the baby from diseases for the first few months.