Share0
Tweet0
Share0
Share0
Tweet0
Share0
Yesterday when we got home from church I realized that we didn’t have any clean plates or bowls and my kids were hungry.  It was time to use a snack-time idea that I saw on a video awhile ago and pull out the ice trays.  It was such a big hit that I am going to do it more often, even when the dishes are clean.  :o) 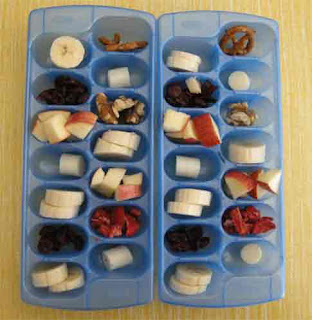 My children usually do not finish eating everything on their plate, but they ate really well with the tray.  They thought that the little compartments were really neat.  The video that I saw recommended using ice trays to introduce new foods to small children.  Most of the food is something that they already love, and only one tray has the new food.  You can also put chunks of meat and entree leftovers in them.  I didn’t do that this time, but it is something to consider.  My tray had banana slices, cheese stick slices, craisins, freeze-dried strawberries, apple chunks, walnuts, and a couple of pretzels.  We are trying to cut back on dairy in general, and this way my son was content to have less than a whole cheese stick all by himself. 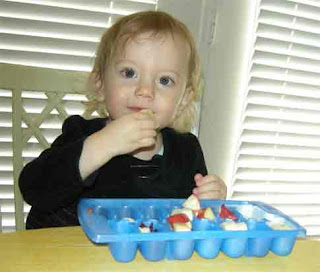 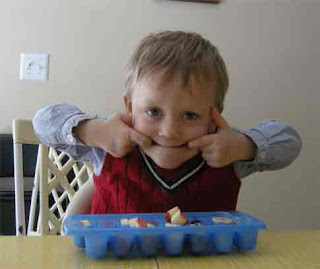 (He’s not really making faces at you.  He was told to smile for the camera and was making a smile.)