Share0
Tweet0
Share0
Share0
Tweet0
Share0
Today I wanted to share some tidbits about how we use Glenn Doman’s crawling track in our home.  (As seen in Teach your Baby to be Physically Superb, and How Smart is Your Baby?) We have been using the crawling track with my son since he was about a month old.  Doman’s book mentions how lucky the baby is who has parents who bring the crawling track to the hospital with them, but I find that using the crawling track from birth is a little bit impractical.  Even if I did go to the hospital for my births, the last thing I would want to pack around is a bulky crawling track!  Some of Doman’s ideas have to be taken with a grain of salt, but please understand that Glenn Doman is one of my heroes.
So, we don’t use the crawling track from birth, mostly because I want to wait until the umbilical chord has healed before laying them on their tummy.  The other thing that I don’t do is have the crawling track right next to our bed.  We were originally going to do this, and that is why we put a “wall” on one end (the top end in the video).  We did this with the idea that the crawling track would be elevated between our bed and the wall, and if the baby crawled the length of the crawling track at night, the wall would protect them from crawling onto the floor.  However, in practice, I prefer to have the baby sleep right next to me.  It’s better for breastfeeding and for helping me respond to the baby’s needs.  I don’t recommend adding the extra wall onto the end, it was a lot of extra work.
What we do do with the crawling track is use it every day, mostly as prescribed by Glenn Doman.  We do the short, specific sessions to encourage the baby to move, but I rarely leave them to explore in the crawling track for extended periods.  Considering his older siblings, we do this for his own safety.  (Plug for babywearing!)
When they are first learning how to use it, I put my hands behind their feet as pictured below.  When the straighten their legs, they are propelled forward.  When the bend their legs, my hands follow.  In this manner, they experience success from the beginning.  For this exercise, I like to have them fully clothed so that they are as slippery as possible. 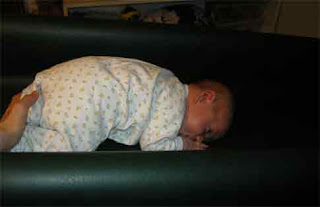 Phase two, using a book instead of my hands.  Now they have to a create blank space to move forward.
Phase three starts at around three months of age for us, where the child has to move independently.  Clothing for this is a simple onesie.  It makes the body slippery, and gives the arms and legs some traction to work.  I still help sometimes.  My son in this video primarily used his arms at first, and would become frustrated when his arms were struck behind him.  I would gently move his arms forward and he would propel himself forward again.  Rinse and repeat.  Now he uses his legs, and sometimes makes pretty good time getting down the track.  In this video he is 4 1/2 months old.
So What’s the Point?
The goal behind using a crawling track is to teach children that moving their limbs can ultimately result in transportation.  But there’s more than that.   Using the crawling track helps their brain develop as they learn to understand the third dimension sooner.  As they move down the track, objects become closer.  Reaching mommy’s arms, or a red ball, or any other object becomes a specific, reachable goal.  That’s empowering for a newborn!  At one month old, my two children who have used the track are usually very passive, but when they are placed on the track, you can watch a change come over their face.  The wheels are turning inside.  When they reach their goal, they smile and are empowered.  The crawling track is worth it for that alone.
For more information, I refer you to Glenn and Janet Doman’s books.  There are a lot of enrichment activities that they provide that are beyond the scope of this post.
Previous
Next