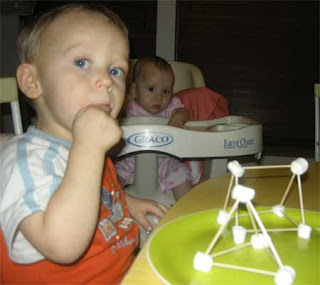 The marshmallow buildings project is a little bit advanced for the two-year-old, but I still think he got a lot out of watching his parents, and I know he enjoyed eating our creations! Marshmallows are not the most nutritious snack foods out there, and I have heard of families successfully doing this project with cubed apples, carrots, celery, and if you don’t want to eat it, modeling clay. 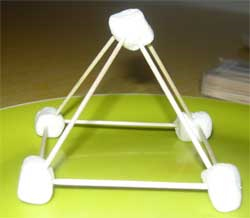 The square pyramid was used by ancient civilizations, and has stood the test of time. In fact, of the seven ancient wonders of the world, the great pyramid of Giza is the only one that still stands. Discuss reasons why this is so. The strength of the pyramid is certainly a large part of it, although war, conquest, and climate also have a role to play. The seven wonders were 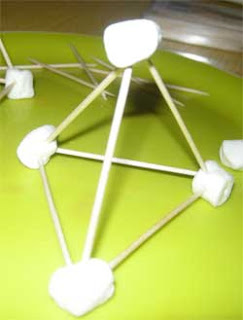 This triangle pyramid is called a regular tetrahedron, which means that all four sides are equilateral triangles.

Building a playground
Now if your child feels ambitious, here is a fun project. If you have built a gingerbread house, this playground equipment would be a fine addition. I got the idea to make this structure from Disney’s Family Fun magazine, only they made it with rolled up newspaper connected with a stapler. This structure was big enough for children to sit under, and it looked like a lot of fun. 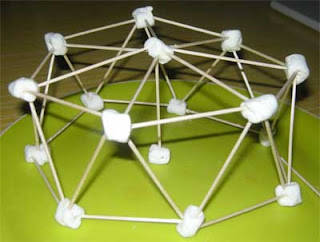 To make the playground, you will essentially need two septagons (7-sided shape), connected to each other by way of the triangle. The best way to make it is to build half of the fence twice and then connect them together to make a circle. 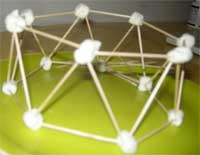 Then poke a toothpick in each upper marshmallow and connect them together in the center. They will stand on their own, but to add more support, I added a “tent pole” in the middle with a marshmallow base. This made the top go higher instead of lower than the fence. Count all of the triangles! See more marshmallow buildings at this blog.