Share0
Tweet0
Share0
Share0
Tweet0
Share0
Making a math pond was a simple project that has become one of my son’s favorite activities. I used the vast resources of the internet to find simple drawings I liked and then edited them on photoshop to print out these ponds on blue paper. I then found free coloring pictures for the ducks, the fishes, and the frogs, and printed them on colored paper. For the fishes and frogs, I trimmed construction paper to make it fit in our printer. This is so much cheaper and easier than printing in color. 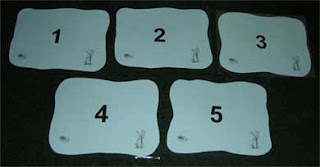 I initially made the math pond for ducks during a week when I was focusing on the color yellow. There are two songs I used for the ducks, as I placed the corresponding number in the ponds.Five Yellow Ducks
One yellow duck went out to play
Out in the farmer’s pond one day.
He had such enormous fun
That he called for another yellow duck to come.
Two yellow ducks went out to play
(etc., ending with “They had such enormous fun
That they played until the day was done”)

The next week we were learning about orange, so I made orange fishes to add to our math pond game. Elsewhere on this site I have mentioned that I love my laminator, which I have made several bits of intelligence cards with. It is also perfect for projects like this, as having laminated fish is better for the endurance of this toy, especially if it is used often. You could also use clear contact paper, or even clear boxing tape and have similar durability. I cut the fishes out, laminated them, then cut them out again to create a water-proof seal, which has really turned out to be handy a couple of times. Then I taped paper-clips to the back for some real fishing.

My fishing pole was made with an oak dowel I bought at home depot. (I had bought it to help Helen grasp it as part of the “physically superb” program, but it wasn’t very practical for me and I never used it. The fishing pole has been a much better use!) I taped a piece of ribbon to the pole, and then used a lot of tape to safely secure a strong magnet to the other end. Voila! A fishing pole.

I will set up the ponds with the corresponding number of fish (I only did different animals in this picture for illustration purposes, I only do one animal at a time) and let the consistent set-up of the numbers do the teaching. With my son, I just focus on having fun. Making it a “joyous” activity. I am sure I could have found cute songs or rhymes for the fishing pond, but Peter loves it as it is, so I let myself off easy this time.

You guessed it, this was for green week. When I introduced the frogs, Peter was very excited and ran to get his fishing pole. I taped paper clips to the frogs too. He loves fishing for frogs more than the fish. Go figure. Here’s a variation of a famous song for the frogs:Five Little Speckled Frogs
One little speckled frog
Sits on a speckled log,
Eating the most delicious bugs, YUM YUM!
He jumped into the pool,
Where it was nice and cool,
See, there is one speckled frog.
Two little speckled frogs (etc.) 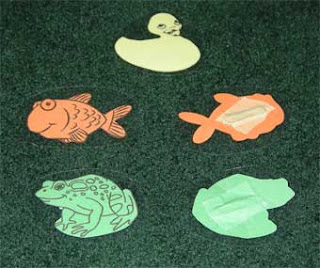 I could have gone on to make purple snails or octopi, red crabs, or blue sea serpents for the math pond, but I didn’t. That will perhaps be a project when Helen gets older…
Here is a website with more Math Pond Activities.