The History of Tomte

Recently one of my Pagan communities had a serious discussion about Elf on the Shelf. While some of the parents saw make-believe Christmas elves as something entirely different from the history, others were deeply troubled by the idea of inviting ANY elves into the home, imaginary or not, because of what it represents.See, real elves, pixies, and especially fairies, were extremely different than what Disney may lead you to believe. Collectively they are known as the Fae, and there is a lot of cultural similarities and crossovers in the mythology about them. They aren't exactly evil, but they are also not benevolent. They have their own realm and it's better for everyone if we keep to our own. So to invite an elf into your home is asking for trouble. They are mischievous at best, and they can be notoriously difficult to get rid of once you have invited to your home and/or property. (I think it's very likely this mythos was the inspiration behind the Wee Sprites in Sofia the First, their depictions of fairies notwithstanding.) Whether I believe in fairies or not, I'm very inclined to respect their historical meaning, and "Elf on the Shelf" never really appealed to me anyway.  But that's a personal thing!  The holidays are whatever you make of them!

A much better alternative is the Nordic Tomte, also known sometimes as Nisse or Brownies. Unlike the Fae, they were much more friendly, and to have one living in your home was to have a guardian to protect your homestead. They were especially prone to live in farmlands, in part because they loved horses and have a special way with them. They would often help out too, sowing fields, healing and protecting livestock, mending fences, even protecting children from harm. To have a Tomte living with you is good fortune indeed. So it's best not to offend them. Never criticize their work. If you cross them, they too can become mischievous, and in worse cases, they may even kill livestock. Worse, they may leave your home altogether. Tomte can be reasonable though, especially if given a proper apology, accompanied by an offering of new clothes, or their favorite meal, porridge. Tomte were also the gift givers at Christmas/Yule long before Santa Claus, and they still do in some Nordic areas. They had tall, conical hats that were almost always red, which leads some historians to believe they were the inspiration behind Santa Hats. (Pileus hats worn by freemen year-round in Ancient Rome, but by all, even slaves, during Saturnalia being another contender). 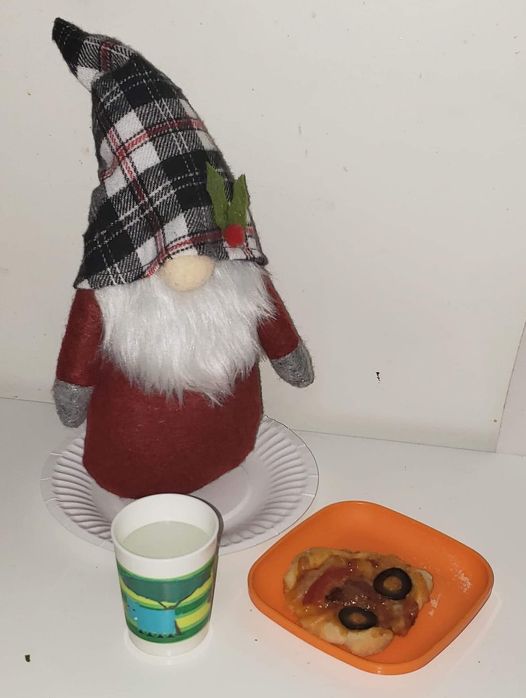 Pictured is our new Tomte friend, whom the children have named Teo. The children (and adults!) are encouraged to do little jobs, and move him to the location and give him credit. We also offer him a small portion of whatever we eat for dinner. Pictured is a miniature pizza the kids made him. He's been so fun.

And for my balloon friends, here's an adorable and easy design by Lauralloons that was very popular last Spring. There are several Tomtes around our home now, but Teo is the one we give serious attention to.