The History of Gingerbread

Gingerbread!  Ginger was an exotic spice that was part of the famous spice trade.  It was fairly expensive, and as such, originally only the wealthy could afford it.  In Europe there were monasteries which specialized in bee production.  They needed mass amounts of bees wax to make candles for worship, and the honey was a pleasant side effect.

So here they had honey and enough money for exotic spices like ginger and cinnamon, and through experimentation, they are credited with making the first sweet gingerbread.  The spice and honey acted as natural preservatives, and gingerbread gained a reputation for lasting longer than regular bread.  The dough did too.  The health benefits of ginger were known, and originally these cookies were more for indigestion than for culinary delights.  Their natural shelf-life made it ideal for winter consumption when fresh grains were less plentiful.  But more than that, people were more inclined to splurge on nice things for themselves and loved ones, and monasteries were also more generous during the Christmas season.  Gingerbread began to be associated with Christmas, but one could buy it any time of the year.  Valentine's day was a popular time for gingerbread hearts  ("I give you my heart" is a phrase tied to gingerbread hearts symbolic of ones affection). Artisans also sold gingerbread trinkets, often as good luck charms and souvenirs in addition to eating during festivals and fairs throughout the year.

Queen Elizabeth I is credited for the first gingerbread man.  She had fancy cookies made to resemble her guests, and they were a big hit.  Soon other monarchs followed suit.  Small molds were made and monarchs would have cookies resembling themselves given to children as a gift.

As gingerbread became more elaborate, someone, probably in Nurenberg Germany, made the first gingerbread house.  Nurenburg had the nickname of "Gingerbread capital of the world", and the artisan pastries made by guild members were of such a high quality that one could pay their taxes with them.  Gingerbread houses were probably a local thing until, presumably, the Brothers Grimm came across them and made them famous in their "Hansel and Gretel" story.  There is some dispute that the story may have come berfore the actual houses, but many historians think that the cookie archetecture came first.  Later gingerbread houses became even more popular during Christmastime because of their appearance in the original Nutcracker story, although the castle itself is made of marzipan.

Gingerbread was originally mostly very hard and crunchy.  It was early Americans that first decided to use molasses instead of processed sugar, which was cheaper and more readily available in the colonies.  Molasses makes far softer cookies, and they were popular.  According to Wikipedia, the first American cookbook, "American Cookery" by Amelia Simmons, published in 1796, contained 7 different recipes for gingerbread.

For more information, there is a fantastic documentary on Amazon Prime called "Gingerbread Journeys" (2015).  It is one thing to read about gingerbread, but to see the molds in action, to see the places that made it famous, and hear from the modern artisans who have kept the craft alive is really special. 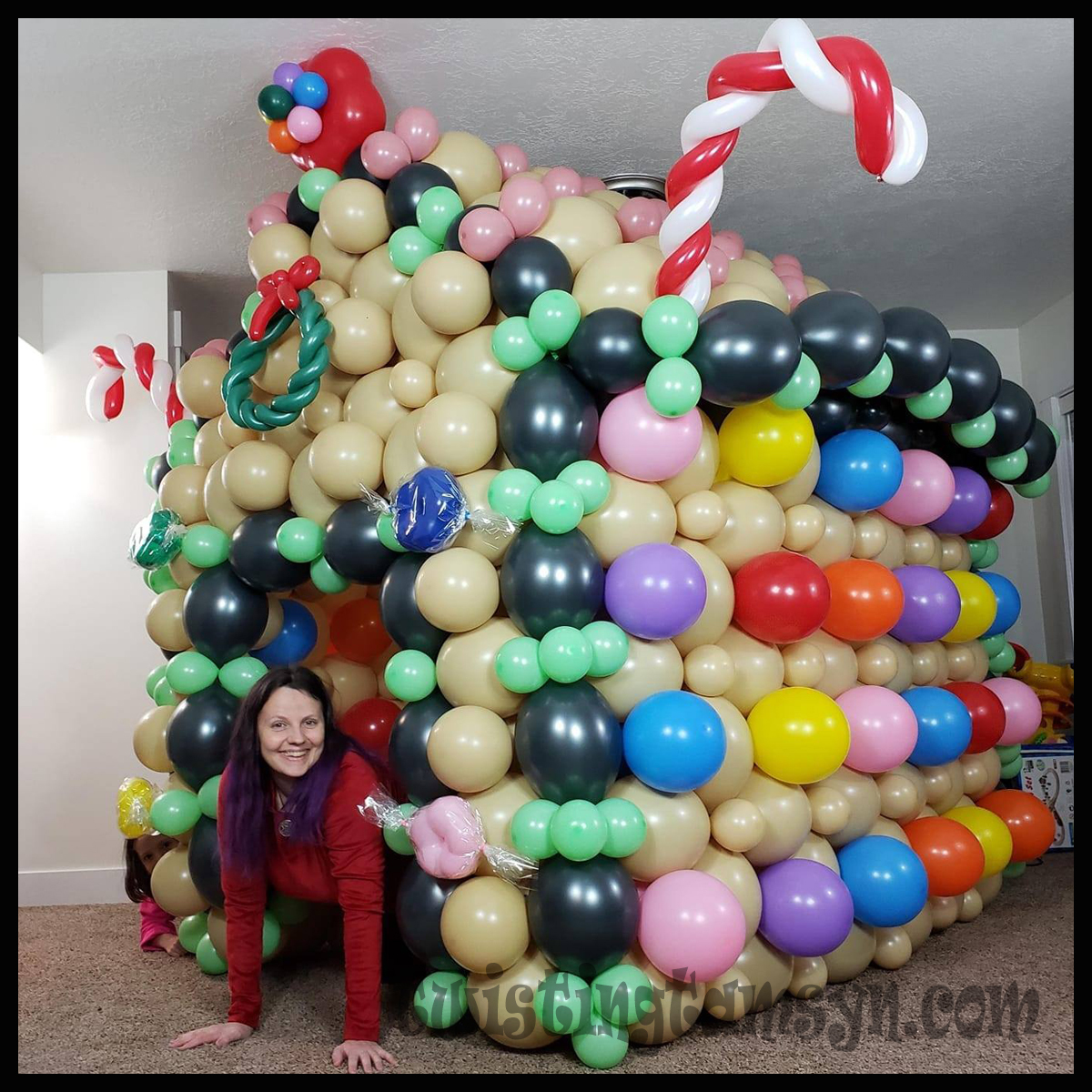 Bonus picture:  This gingerbread house is my favorite thing I've ever made out of balloons.  🙂

Back to the main Calendar