The History of Krampus

Krampus, the terrifying Christmas Demon.  December 5th is his night.  Forget about coal for naughty children, this entity will kidnap naughty children, stuff them into his basket he carries on his back, and either eat them or take them to his lair to become slaves.  Christian or Pagan?  Well, love it or hate it, this is another one for team Christian, and most especially Medieval Christendom. 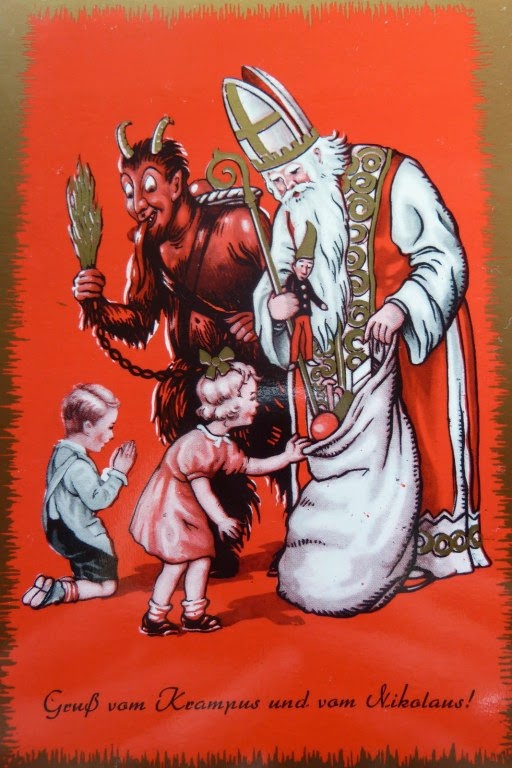 I cannot blame anyone for thinking Krampus was Pagan, after all there is *some* influence behind his character.  I mentioned Mumming in my Wassail post, which was started as a way to ward off evil spirits during the Wild Hunt (a topic for a future day.)  People were terrified to be outside at this time, but dressing as wild animals was a way to fool the evil spirits into thinking you were one of them, and hence give safe passage to ones' destination.  So there is some precedent for dressing up during the holidays.

However, Krampus serves a completely different purpose, and he has a distinct look.  He has cloven hooves, horns on his head, and a very long tongue.  And unlike Mummers, Krampus bears heavy chains, which he rattles during Krampus parades with terrifying effect.  Krampus resembles none other than the devil himself, far more than any Pagan deity.  Another huge clue that Krampus has Christian origins is his close association with St. Nicholas.  Krampus bears chains because he is under St. Nicholas's control.  When children are kidnapped by Krampus, more often than not, it is St. Nicholas who saves them.  Krampus plays an important metaphorical role as the antagonist of St. Nicholas.  In Catholic lore, time and time again, the great Saints had great power over the Devil and his demons.  It was a very important intercessionary role, and for it to be clearly demonstrated, St. Nicholas needed an antagonist.  Krampus night is December 5th in part because it is the eve of St. Nicholas Day.

You can learn more about the non-Pagan origins of Krampus in this excellent article.

And while I could leave it at that, I think it would be interesting to take a step farther, and look into the origins of the appearance of the devil himself.  There is a documentary on Amazon Prime called "How the Devil Got His Horns", which goes into the history of the devil in art from the earliest Christian santuaries, through medieval churches, past Dante's Inferno, and in to modern times.  There are images that may be disturbing for younger kids, but I watched it with mine anyway, with permission to leave.

In a nutshell, the early imagery for the devil was perhaps inspired by the Celtic Horned God (who was very good, and very loved), the mischievous Greek god Pan (who may in turn have been inspired by the Horned God), but most especially from the mischievous, lovable, albeit ugly Egyptian god Bes.  If you don't want to watch the documentary, you can learn more about that connection in this post.  So, yeah, there is some Pagan inspiration behind Krampus, but if we are going to go down that road, at best it was minimal art inspiration.  At worst, it was cultural appropriation that demonified beloved deities for the sake of religious conquest.  The truth is probably somewhere in between.

Mostly, I think Krampus's appeal comes from a desire in society to celebrate our fears in a safe environment where good always conquers evil.  St. Nicholas is a Savior figure, a hero, and one who historically inspired children to be good in far more, well, intimidating ways than threatening a lump of coal.  But I'm not particularly sorry that popular culture replaced his demonic helper with elves.  On the flip side, Krampus has also gone solo with his own of Christmas cards.  There was a time when Krampus was forbidden in Nazi Germany, but he survived in the underground, and had a strong resurgence when the war was over.

For more Krampus pictures, this article has many pictures of fully authentic (and expensive!) modern Krampus costumes.  Enjoy at your own risk!