Legend of Korra and natural parenting

Any Korra fans out there?  It’s the sequel to “Avatar: The Last Airbender”.  My family loves it.  What an exciting season!  I’m not going to get into the details of what the show is about here, if you don’t know, you can find out at nickelodeon if you are interested.  The purpose of my post is rather to compliment the show’s quiet example of natural parenting that can be observed throughout the season.  In “The Last Airbender” we see a little bit of natural living when Katara helps a couple with an emergency natural birth in “The Serpent’s Pass”, as well as a few natural remedies when some of the characters get sick.  (okay, I don’t know if sucking on a frozen frog counts, but there were other examples too).

But I digress again.  Let’s look at Korra.  First, co-sleeping.  Apparently Meelo co-sleeps with his parents on a regular basis, as shown here: 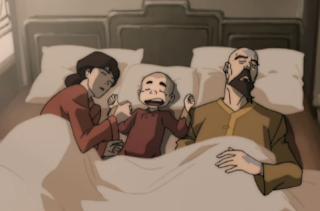 And when Tenzin is away, the daughters join them, as shown here: 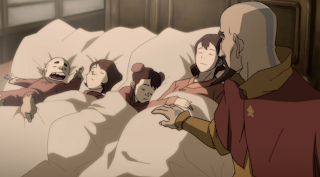 They are also a homeschooling family.  Granted, Tenzin is the only Air-bending master in the world, and his children are the only air-bending children, but everybody homeschools for different reasons.  The children are often present during Korra’s training. 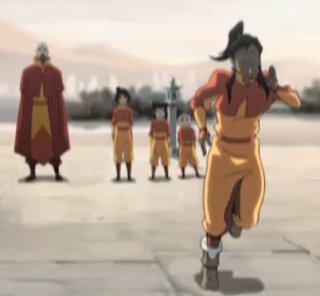 Now I give them kudos for the home birth.  Yes, you could argue it was an emergency homebirth since Air Temple island was under attack, but I think it was a planned homebirth.  (and yes, Republic City did have a hospital, we hear about that in the first episode.)  Pema’s midwives did a great job reassuring her that her children were safe so she could concentrate on the birth.  I love this 3-second shot: 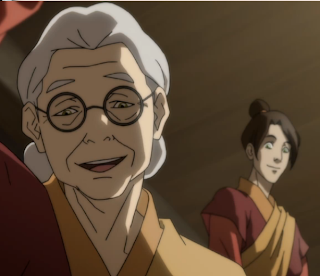 Here is Pema with Tenzin and Rohan shortly after: 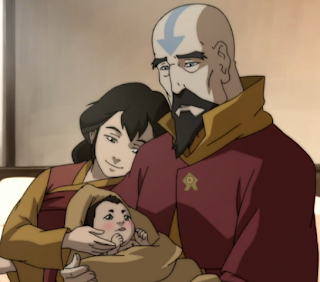 The parents didn’t hesitate to invite the siblings in so they could meet their new brother.  That was a tender moment.  (The only reason they look distressed is because more air ships are coming to attack them, but this is the best shot I could get of their family.) 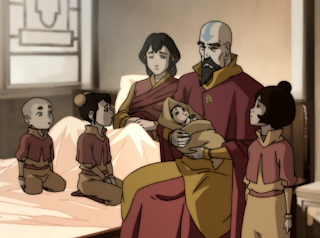 Of course I don’t own the rights to these pictures, but I think that I’m sharing them under fair use.  I really loved the quiet example of this highly popular television series, and I applaud them for it.  Thank you, Team Avatar for great writing and for entertaining my family.  We love your show.