With the homeschool music group, I let the children and their parents come up with the costumes.  Parents are a fantastic resource for costumes.  In every children’s musical production that I have done, I have always been low key about costumes and let the parents do it.  I realize that the audience at the performances are mostly comprised of friends and family, and that tickets, if any, were free and not $50 each.  For me the emphasis is on giving the children a good learning opportunity, and wearing a costume is a fun part of performing, and it shouldn’t be stressful.  If the costume is good enough for the parents, it is good enough for me.

When I did the children’s opera with the Cache Children’s Choir, I was very impressed with the costumes and I want to share some pictures to give you some ideas to work with. 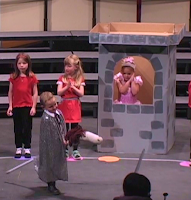 The youngest group of children, ages 3-5, sang a strophic song about Sleeping Beauty.  Most of the children wore the traditional CCC attire of black pants and a red shirt.  There was a girl dressed as a witch, a boy prince on a cock-horse with a toy sword, and a princess in a tower, made of a large cardboard box that had been painted.
The raggle-taggle group, ages 5-7, wore the traditional CCC attire with face masks made of foam for the donkeys, cats, dogs, roosters, and robbers.  The robbers had black-knit hats, pictured here with the wealth of gold that the robbers had stolen. 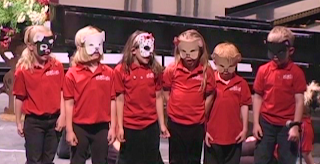 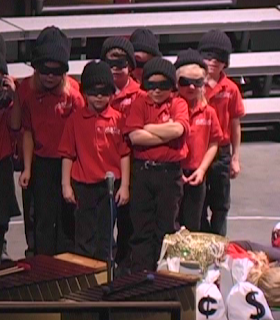 The oldest group, ages 7-9 did an opera about a boy and a girl who went through a magical mirror and had to collect musical chimes to be able to get back home.  They went to a fantasy land where there was a dragon, mermaids, a unicorn, and a fairy.  They met cave people, ghosts, and stinky socks (pictured).  There was a lot of work that went into these costumes and they were fantastic.  It all depends on what you are willing to do, what sewing skills you or those you are working with have, and the time-frame that you have to work with. 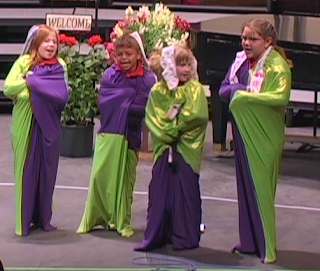 Scenery and props
Don’t stress it, it isn’t that important.  The more you let the children (and audience) use their imagination, the less work that you will have to do.  If you do want to have scenery, tempera paints on large cardboard boxes from the appliance store are a cheap and effective way to go.  You can also borrow, shop in your attic, or work with items from the local thrift store.
Staging
The larger the cast, the more you will need to direct the children on where to stand and when to do what during the performance, but allow the children to give you their input and advice.  With a smaller cast, let the children decide where they will stand and what they will do during different parts of the opera during rehearsals, but then remind them what they decided afterward and have them practice that way.  There should be at least one rehearsal dedicated solely to practicing the staging with the music.  In other words, hold at least one rehearsal where the children are not creating anything, but are purely practicing.  More are optimal for a better performance, but that may or may not be your purpose.  Are you a performing group, or is this an opera workshop to teach children about opera?  Maybe it is somewhere in between.   Adjust you schedule to accommodate your purpose.
The Performance
Be flexible and focus on the children.  The audience knows that your cast is not professional, and are most likely family and friends of the children.  They are there to be supportive, so don’t worry about what they think.  Chances are that they will be very impressed and pleased with the results anyway.   How do you focus on the children then?  Give them a prep-talk before going on stage.  Tell them how proud you are of all of their hard work.  Tell them to have fun, and that you will be there to help them.
It is appropriate to say a prayer before performing too.  I know that this is controversial in some areas and to some people, and I am a religious person and am inclined to suggest it.  However, as a performer I have almost universally seen it done.  A simple prayer that the children will remember their lines and music, and that they will have a good experience will do much to comfort nervous children.
Oh, and be flexible.  Really.  Children may forget their lines, come in early or late, and a myriad of other things.  Stay calm and the children will too.  Work with the challenges that come, for “the show must go on”.  In the performance of the homeschool opera, Rapunzel didn’t show up.  To this day, I don’t know if there was a family emergency or if they just spaced it, and it doesn’t really matter.  Things like this happen and you need to work with it.  I told the children that we would just skip her lines, but in retrospect, this was unfair to Sleeping Beauty because Rapunzel’s lines were her cues.  I should have sung Rapunzel’s part at the piano, but I didn’t.  You learn as you go.  When it is over, praise the children, graciously accept any compliments but then direct them back to the children because, after all, this really was their work.
Previous
Next