There are few things more thrilling to young children than making homemade instruments and then playing them in a family orchestra. Virtually anything that can be hit, plucked, shaken, or blown can be turned into an instrument. There are too many articles and books written on musical instrument toys for this to be a comprehensive list, so I’m not going to even try and instead give you a few ideas to get you started. 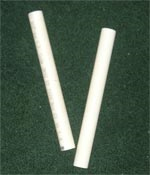 Claves, or rhythm sticks, can be made with virtually any kind of stick that can be banged on each other. We have actually purchased a couple of sets, and they are my children’s favorite. The claves pictured here are made of PVC pipe. They have used craft sticks, pieces of dowel, and kitchen utensils for this purpose as well.

This one is my favorite. You will notice in the video that the glasses that have more water in them seem to resonate less. Goblets work best tuning purposes, and you have the added benefit of rubbing your fingers over the rim for a singing timbre. If you color the water, you may want to have a separate water bowl to moisten your fingers with. I colored the water to make it more attractive to my toddlers. The colors I chose were red, yellow, blue, orange, green, and purple. I chose these colors for their contrast, but any color combination would work. 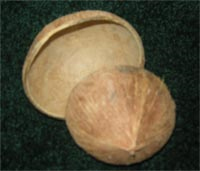 Reminiscent of Monty Python and the Holy Grail, the coconut halves resemble the sound of a horse’s gallop. To make ours, my husband drilled two holes in opposite sides of a coconut and drained the milk out. Then he used a saw and cut around the edges. He said that he only used the saw for the hard outer shell, and when he was done he hit the coconut on the cabinet and it broke cleanly. One of these days I may sand them, but I haven’t gotten around to it yet. In Kids Make Music! Clapping & Tapping from Bach to Rock! , they suggest that you can buy a large balloon, cut off the mouth piece, and stretch it over a coconut half to make a bongo drum.

We have a set of metal mixing bowels in our kitchen and they make wonderful percussion instruments. Adding water is fun because the pitches change as the water level is changes, or the water is moved while the bowl vibrates. Try hitting the bowls with different kitchen utensils to see what kind of sounds they make. Does it sound better with a wooden spatula or a metal one? What about plastic? Does the size of the utensil matter? What happens when you tap on different parts of the bowl? Do you like the sound if you hit the bowl from under the water? Can you see the water vibrate when you hit the bowl? There are many extension activities you can do with metal pots and pans.

These were created with frozen juice lids I was saving for another purpose, but I discovered a nice ring when I flipped them like pogs on the carpet. Small metal pieces can make a lot of fun sounds. I think I’m going to drill holes in the coins and make a wind chime with them and some other metal knick knacks. That’s a project for later this summer…

This is the classic homemade instrument toy, and it can be made in a variety of different ways. I had a great sound when I used a smaller shoe box, but there were strong objections from my son so I used aluminum cans instead. I only recommend using cans if you have a can opener that will cut the can open smoothly, safety first! The important thing to have when you make stringed instruments is a sound box, strings, and a bridge of sorts so that the strings can vibrate freely. All of this is accomplished with a can and rubber bands. In the video I used two different sizes to show the contrasting sounds.

These can be made with anything that will contain small objects and air. Egg shakers are probably the most popular. My example in the video was a vitamin bottle I partially filled with beads. That was easy…

The guiro is an instrument whose sound is made by running a stick across an instrument with several notches, and the resulting sound is much like a ratchet. Our guiro was the same #10 can used in the stringed instrument shot, and our stick was nothing more than a craft stick. Aluminum cans often have several notches down the side, premade for your guiro enjoyment. (I’m sure that’s why they put them there, right?)

For more ideas, see the homemade instruments on this site.