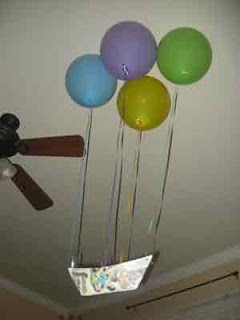 If you run into my son at the grocery store and are polite enough to give him eye contact, he is sure to tell you about one of the features of his flying moterhome. “I have a flying moterhome, and it has boosters that make it go really fast…”
Where he got the idea, or why it has so captivated his young imagination, I am not sure, but whatever it was, he’s hooked. Suddenly blimps and spaceships are variants of his mot erhome, and we begin seeing the world with different eyes.
Flying machines are actually very common in children’s media. Just think about the house inUp, the blimp in Kiki’s Delivery Service,, the make-shift balloon-flag in The Great Mouse Detective, or the many hot-air balloons attached to boats that make their appearances in the Saturday morning cartoons. All of them captured the imagination of my son.

Creating our own flying machine 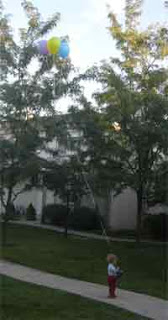 After hearing, “I want a flying moterhome” every day for several weeks, I contemplated how I might give him one. The answer for us was to make our own flying machine out of paper and helium balloons.
Our boat was made from the comic section of the paper, attached to four balloons. To make it “sea worthy”, we connected a fifth line to make an “anchor”, which was tied to a heavy toy so that the children wouldn’t accidentally send our craft on any un-wanted adventures.
For hours that day the flying machine traveled through the air, carrying whatever small toys that were light enough to enjoy a ride. 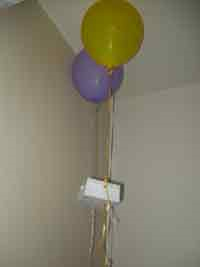 Children learn best through play. When teaching moments accompany something that they are interested in, their ability to focus and retain knowledge is increased.
While playing with our “flying machine” we discovered which toys could fly in the boat. He solidified the concepts of heavy and light as he experimented with different toys. He learned that four balloons will carry more than two.
He also learned about origami. On day two of our flying exploration, as our boat sank to the ground, my husband helped me make lighter ships, carried by two balloons, and doubling the fun. I will post a video soon on how to fold paper boxes like the pictured posted on the right.
When my children are older I want to repeat the experiment with a scale. We will weigh how much one balloon can carry and make predictions for how much weight two balloons can carry. How many balloons will it take to carry a marble? A toy car? A plush toy? Will a bigger balloon carry more? How much more? How many balloons would it take to carry a house? What about a person? Has it been done before? (Yes! check out http://www.couchballoons.com/ )
Happy Flying Everyone!